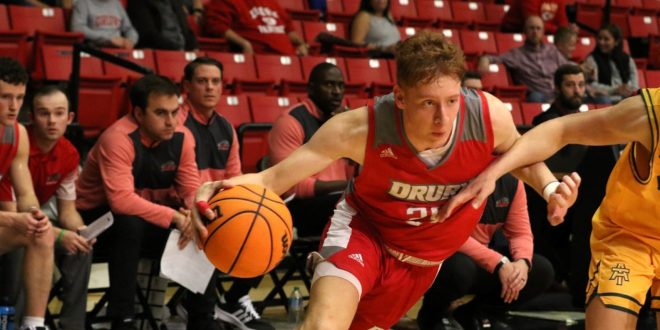 SPRINGFIELD, Mo.– The Drury Panthers, looking to split their games in the DoubleTree Thanksgiving Classic after an opening night defeat, fell short of that goal on Wednesday night, as they lost to Arkansas Tech 68-61 at the O’Reilly Family Event Center and slipped to 2-3 on the season.

After jumping in front of the Wonder Boys 17-8 to start the game, the Panthers saw the visitors outscore them 33-7 over a large remainder of the first half and into the start of the second, extending their lead to as many as 17 points.

Drury put together a rally, however, cutting the margin to five points with just over five and a half minutes to play, but Arkansas Tech was able to stave off the challenge and came away with their first win of the season and is now 1-4.

“I think this was a step in the right direction,” said Drury head coach Chris Foster.  “We didn’t fold like we did last night.  I thought we had some fight in us, but you can’t go 13 of 25 from the free throw line and succeed.  That’s not a winning recipe.”

Junior Quenton Shelton paced the Panthers in scoring with 17 points.  Sophomore Brock Wakefield had 12 and freshman Trey Lewis chipped in 10.

The Wonder Boys were topped in scoring by Wes Harris, who finished with a game-high 19 points.  Tech also won the rebounding battle, 40 to 34.

Next up for the Panthers will be their Great Lakes Valley Conference season opener on Monday, November 28th, at 7:45 pm, when they host Missouri S & T at the O’Reilly Family Event Center.