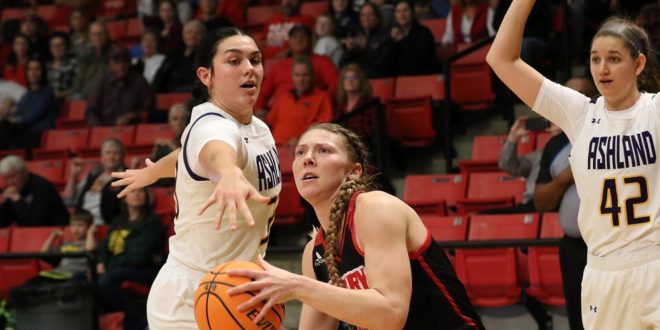 No. 3 Ashland defeats Drury in overtime

SPRINGFIELD, Mo. – In a heavyweight showdown between a pair of top ten nationally ranked teams, it was only fitting that it would take a little extra time to find a winner.

That was the case on Wednesday evening, as the third-ranked Ashland Eagles held on for a thrilling 68-67 overtime win over the seventh-ranked Drury Lady Panthers in the finale of the Oasis Hotel & Convention Center Thanksgiving Classic at the O’Reilly Family Event Center.

Drury trailed 32-27 at halftime, and then after falling behind by nine points in the third quarter, the Lady Panthers stormed back to force a 59-59 tie at the end of regulation.

In the overtime period, the two national powerhouse teams traded baskets until the Eagles found the needed points with just over a minute and a half to play to grab a one point edge and held Drury scoreless to the end, preventing a potential game-winning shot by the Lady Panthers as time expired.

“Talk about a good game, an intense game and a lot of great execution,” said Drury head coach Amy Eagan.  “I thought both sides of the ball played so hard tonight and you just couldn’t ask for more out of the kids on either side.”

Ashland improved to 6-0 on the year, while Drury suffered its first loss of the season and now stands at 4-1.

Drury got another outstanding effort from senior Alana Findley, who pumped in 21 second half points and finished with a game-high 27 in the loss.  Graduate student Kaylee DaMitz-Holt added 14 and junior Allie Clevenger chipped in 12.

“I think Alana has struggled a bit to get going,” added Eagan.  “She didn’t play a lot this summer, but I think she’s getting more back to herself and you saw that down the stretch tonight as she hit some really big shots out there.”

The Eagles , who dominated the rebounding early, but wound up with a 35-29 advantage on the boards, had three players with ten points each.  Annie Roshak, Hallie Heideman and Hayley Smith.

The Lady Panthers are next in action on Monday, November 28th, when they begin Great Lakes Valley Conference play against Missouri S&T in a 5:45 pm game at the O’Reilly Family Event Center.