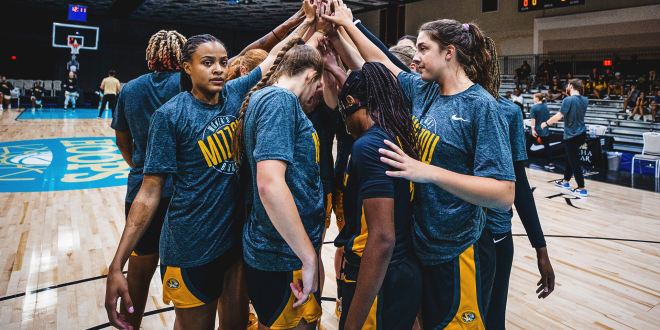 Women’s Basketball to Face No. 11 Virginia Tech on Wednesday

COLUMBIA, Mo. – University of Missouri Women’s Basketball will face No. 11 Virginia Tech in the final matchup of the Baha Mar Hoops Pink Flamingo Championship at 12:30 p.m. CT Wednesday in Nassau, Bahamas. The contest will air live on FloHoops and KTGR.

Missouri is off to a 6-0 start to begin the season following a 69-47 victory over Wake Forest in the opening game of the championship on Wednesday.

Graduate guard Katlyn Gilbert notched 11 points, all of which came in the second quarter, and dished five assists in the win.

The veteran duo assisted on 64% of Missouri’s buckets.

The 22-point margin of victory was the largest against a power five opponent since a 31-point victory over Florida in the SEC Tournament on March 7, 2019.

Wednesday will mark just the second meeting all-time between the programs with Virginia Tech earning a victory in the 2006 NCAA Tournament.

The 11th-ranked Hokies enter the contest at 4-0 following a victory over Kentucky on Wednesday.

The ACC opponent is led by Preseason ACC Player of the Year Elizabeth Kitley who is averaging 19.5 points per game this season.

Season tickets for the 2022-23 campaign are on sale now and can be purchased by visiting ticketmaster.com/Mizzou. For more information, call the Mizzou Athletics Ticket Office at 1-800-CAT-PAWS.