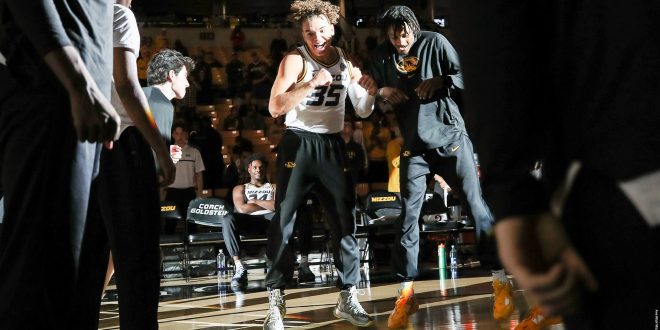 The Missouri men’s basketball team continues its early-season homestand with a contest against Coastal Carolina. First tip at Mizzou Arena is set for 6 p.m. on SEC Network+.

PROMOTIONS
• The MO Highsteppers are set to perform at halftime of Wednesday’s game.

ABOUT THE TIGERS
• Missouri is 5-0 to open the 2022-23 campaign after posting an 83-62 win over Mississippi Valley State on Sunday night.
• Graduate student D’Moi Hodge and senior Isiaih Mosley led the Tigers in scoring with 18 points apiece versus the Delta Devils.
• Hodge now leads MU with 17.0 points and 2.8 steals per game in 2022-23.
• Overall, four Tigers are averaging in double figures with Noah Carter (12.6) ranking second on the team.
• Kobe Brown adds 12.4 points with a MU-best 6.2 rebounds, while Nick Honors averages 10.8 points and team-leading 4.0 assists.
• The Tigers lead the SEC with 91.8 points per game, while allowing 74.2.

ABOUT THE CHANTICLEERS
• Coastal Carolina owns a 2-1 record through three games – defeating St. Mary’s (Md.) and Methodist before falling to USC Upstate.
• Jomaru Brown leads four Chanticleers in double figures with 21.7 points per game.
• Essam Mostafa is second with 16.3 points, while leading the team with 13.3 rebounds per game.
• Henry Abraham has team-best 8.3 assists.
• Through three games, Coastal Carolina averages 95.0 points, while allowing 56.3.

SERIES HISTORY
• The Tigers and Chanticleers have played two times previously with Mizzou winning both contests in Columbia.
• The schools last met in 2001 with Kareem Rush scoring 21 points in a 15-point victory.

TIGERS VERSUS SUN BELT
• Missouri is 8-1 all-time against schools in the Sun Belt Conference, including a 5-0 mark at home.
• The Tigers have won their seven meetings versus conference foes with its last matchup coming in 2018 – a 65-45 win over UT Arlington.
• Mizzou’s only loss to a Sun Belt team was in the 1986 NCAA Tournament, falling, 66-64, to UAB.

STARTING 5-0
• The Tigers have started the season with five-straight wins – just the second time in the last nine campaigns Mizzou began the year 5-0.
• With a win on Wednesday, MU will match its best start in nearly a decade as only the 2020-21 team also began 6-0 in the last nine years.

HODGE NAMED SEC POTW
• Graduate student D’Moi Hodge has enjoyed a strong start to his Mizzou career and was honored on Monday as SEC Player of the Week.
• Hodge led MU to a 2-0 week, averaging 24.0 points, 5.5 rebounds and 5.0 steals per game.
• He scored 30 points in the win over SIUE – the most by a Tiger this season – before adding 18 points and a career-best six steals versus MVSU.
• Hodge leads Mizzou with 17.0 points and 2.8 steals per game through five games.

DOMINANT ON BOTH ENDS
• The Tigers have controlled the game on both ends of the court as of late.
• Missouri has shot at least 50 percent in each of its last three games – MU’s longest run since a four-game stretch from Dec. 5 to Dec. 19, 2017.
• The Tigers have also held their opponent under 40 percent shooting in the last three games – the team’s longest streak since a five-game run from Dec. 3 to Dec. 30, 2019.
• Collectively, it marks the first time MU has made both 50 percent of its field goals and held its foe less than 40 percent in three-straight games since a six-game stretch during the 1991-92 campaign.

DEFENSIVE DISRUPTION
• One way the Tigers will look to counter the Chanticleers’ offense is by forcing turnovers.
• The Tigers currently rank second nationally with 13.0 steals per game, while placing 12th in the country by forcing 20.8 turnovers per game.
• In its most-recent contest, Mizzou forced MVSU into 23 turnovers – 16 by steals. It was the most steals in a game for Missouri since collecting 18 against North Florida in 2010.