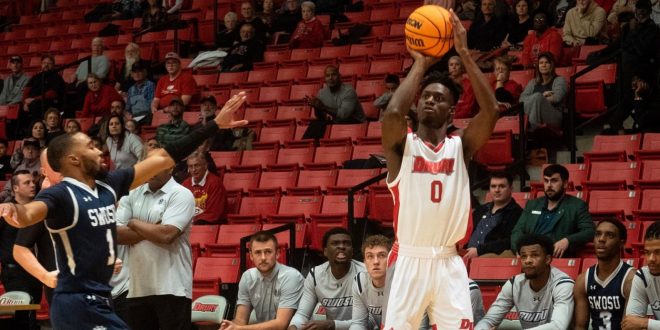 SPRINGFIELD, Mo.– The Bulldogs of Southwestern Oklahoma State made the most of a redhot shooting night from long-distance and downed the Drury Panthers 85-65 on Thursday night in the DoubleTree Thanksgiving Classic at the O’Reilly Family Event Center.

The visitors were impressive, hitting on 17 of 33  from three-point range, led by Kamden Gipson, who hit on eight of his sixteen three-point attempts and finished the night with 26 points, as the Panthers were unable to overcome the scoring difference.

The Bulldogs (2-2) held a 31-26 advantage at halftime on the strength of their long-range shooting, hitting on eight of twenty-one attempts from behind the arc.

The Panthers battled back and with just under ten minutes remaining were within six points, trailing 51-45, but the Bulldogs went on a 14-0 run to pull away and iced the win with late free throw shooting.

Drury, now 2-2 on the season was topped in scoring by sophomore Brock Wakefield, who had 13 points.  Graduate student Preston Cook and junior Quenton Shelton contributed 12 points each in the loss.

The Panthers will next take on Arkansas Tech in a 7:45 pm game, Wednesday, November 23rd at the O’Reilly Family Event Center as the DoubleTree Thanksgiving Classic concludes.