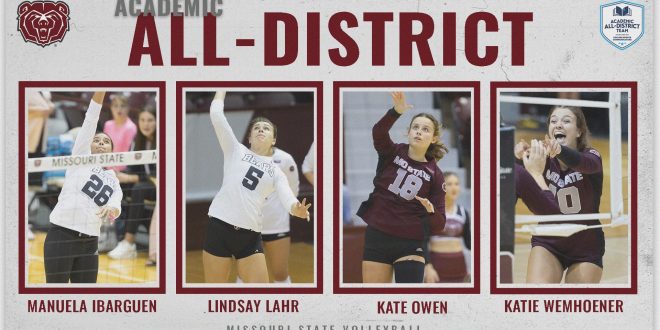 Also a first-team all-Missouri Valley Conference selection, Ibarguen carries a 3.68 cumulative grade point average as a sports medicine major. The senior outside hitter started all 25 matches she played in 2022 and led the Bears in kills (339) and kills per set (3.49) while ranking second on the club in dig average at 2.85, leading to 15 double-doubles on the year. A native of Carmen de Viboral, Colombia, Ibarguen’s six 20-kill matches this year made her one of seven players in school history with that many in a season. Four of those came in succession from Oct. 1-14, a first at MSU since 1997.

Lahr joined the starting lineup midway through the season and finished the year hitting .294 with 90 total kills (1.32/set), 19 aces and 58 total blocks (0.85/set). The junior psychology major from Leawood, Kan., carries a 3.76 GPA, and became the first MVC player since at least 2007 with six aces and six blocks in a match when she did so against Murray State on Oct. 14. Lahr led the Bears in blocking nine times on the season.

Owen was the Bears’ starting libero all season and has a 3.96 GPA as an exercise and movement science major. The Springfield native led the Bears with 469 digs and 3.88 per set average, reaching double figures 24 times and topping 20 on nine occasions with a pair of 30-dig efforts. The sophomore ranks sixth in the MVC in total digs and eighth in average, and second on the Bears with 31 service aces.

Wemhoener was a regular in the Bears’ defensive rotation who ended the season with 161 digs and 29 aces in 105 sets. She had six double-figure dig matches with a high of 12, and six matches with multiple aces, all in league play. The junior defensive specialist from Belleville, Ill., had five aces against Evansville on Nov. 4 and carries a 3.89 GPA as a graphic design major.

Academic All-District honorees advance to the CSC Academic All-America, and honorees will be announced in late December. Eligible student-athletes must be a starter or important reserve who has participated in at least 50 percent of their team’s games in the current season, carry a GPA of 3.50 or higher, be a sophomore in athletic and academic standing, and completed one full year at their current institution.