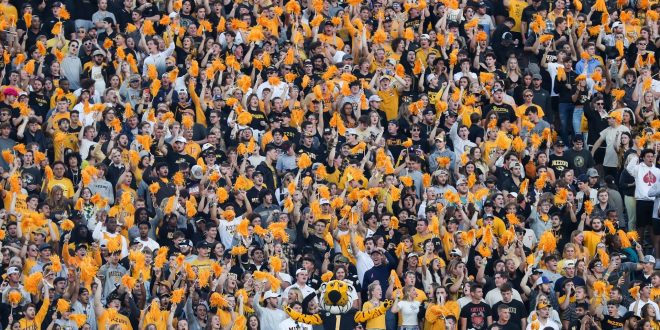 COLUMBIA, Mo. – University of Missouri football closes out the 2022 regular season on Friday, Nov. 25, 2022 against Arkansas for the Battle Line Rivalry, presented by Shelter Insurance, at 2:30 p.m. CT inside Faurot Field/Memorial Stadium. The game is set to air on CBS and the Tiger Radio Network.

THE BATTLE LINE RIVALRY
Friday’s victor receives the massive Battle Line Trophy, which is made of silver and stands more than four feet tall and weighs more than 180 pounds. The trophy depicts the outline of the two states with the border of the two states being divided by interchangeable silver inserts with the words Battle Line in either gold or cardinal. The color of the Battle Line within the trophy will be reflective of the winner of the series’ most recent game – gold for the five of the last six years, representing MU triumphs.

THE COACHES
Eliah Drinkwitz is in his third season as Mizzou’s head coach. He led the Tigers to bowl appearances in each of his first two seasons, joining former head coach Warren Powers as the only two MU head coaches to achieve that feat. Additionally, only Powers won more games in his first two seasons at MU (1978-79, 15) than Drinkwitz (11). Prior to taking the Mizzou job, Drinkwitz was 12-1 as the head coach at Appalachian State in 2019. He had previous stops as the OC at NC State, Boise State and Arkansas State.

Sam Pittman is 18-16 in his third year at Arkansas, leading them to eight regular-season wins a year ago, their highest total in a decade. He’s serving his second stint in Fayetteville after spending 2013-15 as the assistant head coach and OL coach. He was Mizzou’s OL coach in 2000 and has also coached at Georgia, Tennessee and North Carolina during his 35-year career.

STREAKS, STORYLINES, SIDEBARS …
• Mizzou honored 21 seniors before the New Mexico State game, offensive players Jack Abraham, Barrett Banister, DJ Bullard, Kibet Chepyyator, Tauskie Dove, Bobby Lawrence, Nathaniel Peat, Zeke Powell, Trenton Sederwall, Richard Taylor and Connor Wood; defensive players DJ Coleman, Tyrone Hopper II, Trajan Jeffcoat, Martez Manuel, Isaiah McGuire, Devin Nicholson, Darius Robinson, Jalani Williams and special Teamers Jake Hoffman and Sean Koetting. In accordance with Mizzou tradition, following the win, they each took a rock from the M in the north end of the stadium and were carried off the field by their teammates.
• The path forward for Mizzou is simple – win Friday and it would earn a bowl bid for the third-straight season. The Tigers last had three-straight bowl bids from 2009-11 – part of seven-straight postseason games between 2006-11.
• Mizzou announced a pair of contract extensions recently, adding two years to Head Coach Eliah Drinkwitz and three to Defensive Coordinator Blake Baker. Drinkwitz is locked up through the 2027 season while Baker is inked through 2025.
• WR Barrett Banister was named a semifinalist for the Wuerffel Trophy and K Harrison Mevis is a semifinalist for the Groza.
• DB Kris Abrams-Draine is tied for the top spot in the SEC in passes defended with 11, an average of 1.22 per game.
• The 2022 Tigers rank among the SEC’s top four teams in scoring defense (4th, 21.4 ppg), rushing defense (4th, 86.3 ypg), passing defense (4th, 192.4 ypg) and total defense (4th, 304.1 ypg).
• Four of Mizzou’s five SEC losses are by seven points or less and a combined 18 points, excluding Tennessee.
• With 61,047 fans packing Faurot vs. Kentucky, it marked the first back-to-back games with an attendance of 60,000 since 2015 (South Carolina and Florida). Mizzou has averaged 56,147 fans per game at home, an increase of nearly 10,000 fans per game from the Tigers’ 2021 averages of 46,516 fans per game.
• Academically, the 2.92 team grade point average in Spring 2022 was football’s highest in eighteen years, excluding the spring 2020 pass/fail period.

LAST TIME VS. THE HOGS
• Tyler Badie ran a career-high 41 times for 219 yards and a TD in the Tigers’ 34-17 loss at No. 25 Arkansas.
The Razorbacks used a handful of big plays, a strong second half and a stifling defense of Mizzou’s passing game in their first win in the series since 2015.
• On Missouri’s final drive, Badie rushed nine times for 51 yards including a five-yard touchdown that produced the final score. He ran for a new single-season school record with 1,604 yards.

COOK-ING WITH THE AGGIES
• QB Brady Cook finished 19-of-27 for 251 yards with three touchdowns and zero interceptions vs. NMSU.
• The performance marked Cook’s second-consecutive, three-TD outing and his third overall.

FALLING FOR THE FIRST TIME
• TE Ryan Hoerstkamp snagged his first target, reception, and TD, all on the same play – a 32-yard score against New Mexico State.
• RB Tavorus Jones saw action for the third time in his freshman season. His first play on the field vs. NMSU resulted in a 32-yard reception, the first of his career.
• QB Sam Horn took his first career snaps in the fourth quarter vs. NMSU. He rushed for 10 yards in the game.

THUNDER & LIGHTNING
• WR Luther Burden III and RB Cody Schrader accounted for four TDs vs. New Mexico State.
• Burden grabbed two receiving TDs, his third multi-TD game in 2022. He ran his season tally to five – the most by a freshman since Dorial Green-Beckham snagged the same total in 2012.
• Schrader punched in two scores, a two-yarder in the second quarter followed by a five-yard touchdown on the initial possession of the second half, reaching seven rushing touchdowns on the year.

FIRST-HALF FORCE
• For the sixth time this season, Mizzou held an opponent under 120 yards of total offense in the first half.
• New Mexico State had 112 yards before the break, joining Vanderbilt (120), Kentucky (119), South Carolina (104), Abilene Christian (51) and Florida (33) in first-half offensive struggles against the Tigers defense.

SIMPLY RED
• Mizzou’s defense did not allow New Mexico State into the red zone until the 5:35 mark of the third quarter.

SUDDEN CHANGE
• Daylan Carnell earned his second career interception, and first pick six of his career, early in the fourth vs. NMSU.
• The 42-yard INT return was the second of the season for the Tigers, and the longest since Jarvis Ware took an interception 59 yards to the house in 2020 against Florida.

THIRD & BANISTER
• WR Barrett Banister racked up 91 yards on seven catches vs. NMSU. He has broken his career high in receiving yards for the second week in a row, after his 73 yards at Tennessee bested his previous high.
• He has 36 catches on the season – his fourth-straight season with 27 or more catches, the first Tiger to accomplish the feat since Chase Coffman (2005-08).
• Banister also has a catch in 43 of 50+ career games.