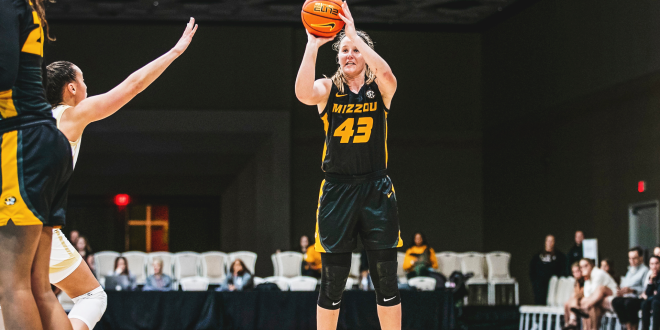 NASSAU, Bahamas – The University of Missouri women’s basketball team ran away from Wake Forest with a blistering second-quarter run to secure a 69-47 victory Monday at the Baha Mar Convention Center. The win extends the Tigers’ undefeated start to 6-0 in the first contest of the Baha Mar Pink Flamingo Championship.

The Tigers played stout defense early, forcing 14 consecutive missed field goals over the course of an 8:06 stretch in the first half. Wake Forest only mustered a 17% field-goal percentage in the first half as the Tigers jumped out to a 20-point halftime lead.

Mizzou’s defense continued to clamp down on the Demon Deacons until the final buzzer sounded. Wake Forest shot 28.8% from the field, the lowest the Tigers have allowed this season. Through six games, no opponent has cracked 40% from the field against the Tigers.

Senior forward Hayley Frank (Strafford, Mo.) and graduate guard Katlyn Gilbert (Indianapolis, Ind.) conducted the Tiger offense throughout. Frank led all scorers with 20 on the game, while Gilbert notched a season-high 11 points as the duo combined for nearly half of Mizzou’s scoring output.

Helped by Gilbert and the return of junior guard Mama Dembele (Manlleu, Spain), the Tigers played unselfishly and took care of the basketball with an 18:9 assist-to-turnover ratio. The pair of guards combined for nine assists as Mizzou tallied an assist on 64% of its buckets.

Mizzou’s offense came alive in the second quarter to lead the Tigers on a 22-2 run in the first half. Gilbert scored 11 points on a perfect 5-5 shooting in the quarter while Frank dropped seven to lead the charge where the offense converted 11 of its 14 field goal attempts during the period.

Missouri wraps up its two-game set in Nassau, Bahamas for the Baha Mar Pink Flamingo Championship Wednesday against No. 14 Virginia Tech. The opening tip is slated for 12:30 p.m., and the contest can be streamed on FloHoops.