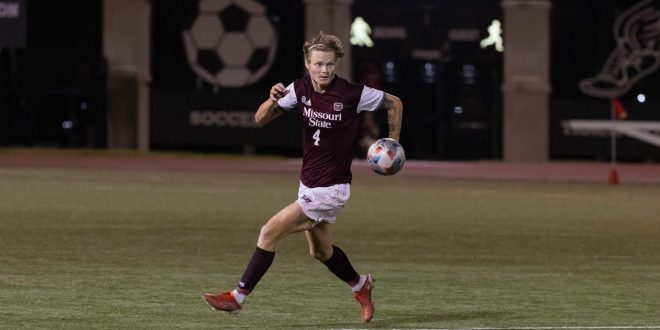 He is the first Missouri State men’s soccer player to receive the honor this season and was one of 11 players from across the country chosen for their efforts. The defender from Northampton, England, makes the team following a standout performance in the Bears’ 4-3 win over conference foe, Evansville, on Saturday night.

Green accounted for two of MSU’s four goals in the 4-3 win over the Purple Aces while assisting another goal. He got the Bears on the board first, giving them the 1-0 advantage early in the first half. In the second half, he scored again, finding the back of the net in the 63rd minute while helping the Bears take back the lead, 3-2. Green also assisted Daniel Normann’s goal in the back-and-forth affair, capping his impressive outing at Allison South Stadium. The two-goal outburst brings the senior’s total to three goals for MSU this season.

The Bears are currently sitting at 5-1-2 on the year and will look to enhance their record when the team plays its first road contest of the season at Bradley on Saturday night.