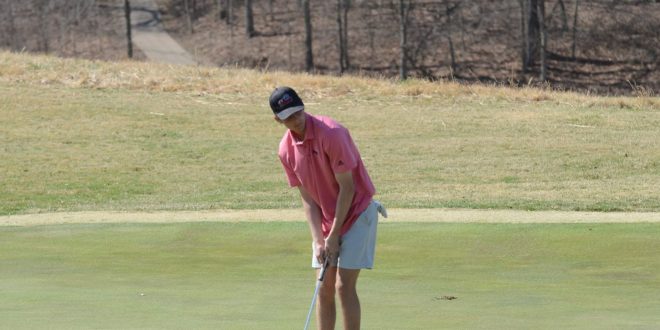 AFTON, Okla.— The Drury men’s golf team is in 12th place among 19 teams at the Missouri Southern Fall Invitational at Shangri-La Country Club in Afton, Oklahoma on Monday. The Panthers have a team score of 611 (+35) through 36 holes. Drury will head into Tuesday’s final round just one shot back of Missouri Southern State for 11th, and they trail two other squads by just two strokes.

Missouri-St. Louis leads the field at six-over-par (582). Oklahoma Christian is in second, four shots off of the lead.

Hunter Jowers leads Drury and is tied for 16th in the 100-player field with a four-over-par 148. The sophomore from Jonesboro, Arkansas, shot a 77 in the opening round, then returned for a one-under-par 71 in his second 18 holes the day and posted the Panthers lowest score of the day. Walker Tynes and Tryn Titus are both tied for 44th at +10 (154), and Alex Wiseman is one shot behind that duo after shooting 155 on Monday. Jack Cronin heads into the third round tied for 82 with a +21, 165.

The third and final round starts at 8 am on Tuesday in Afton, Oklahoma.