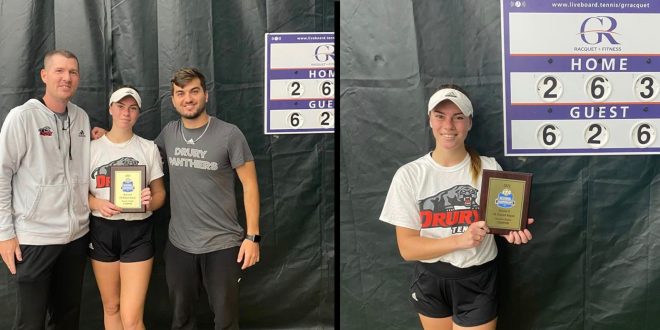 The native of Caen, France, won all six matches during the tournament. Seeded 10th, she won four straight rounds to reach the semifinals, where she knocked off the event’s top seed, Anna Novikova from Indianapolis, 6-3, 3-6 (10-5). In Monday’s championship, Jedrychowski defeated another UIndy opponent, Lea Cakarevic, 6-2, 2-6, 6-3.

Jedrychowski will advance to the ITA Cup and compete for an individual national championship against the other seven regional champions in Rome, Georgia, Oct. 13-16.

In the ‘B’ level bracket, Kseniia Eremina won three rounds to reach the quarterfinals. The senior from Moscow, Russia, recovered from a first set loss in the round of 16 to get past Canela Luna from Hillsdale 4-6, 6-3 (10-4). Eremina fell in the quarterfinals to Anna Soteras of Grand Valley State, 6-4, 6-2.

Drury’s singles players went a combined 13-6 in the tournament.

In doubles, Eremina and Ewa Samberger won three matches to reach the semifinals. The duo defeated Michigan Tech’s doubles squad, 8-5, in the quarterfinals, then lost to the top-seeded team in the region, Anna Novikova and Sofiia Sharonova from Indianapolis, 8-3, in the semi’s.