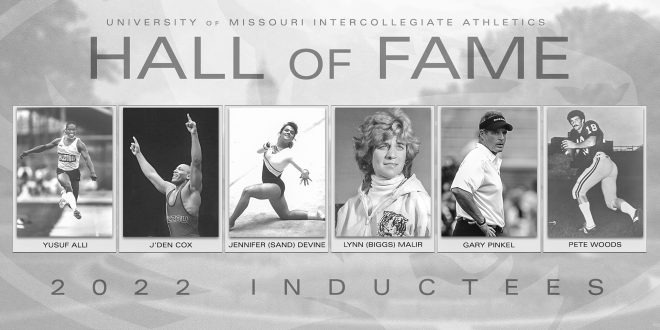 COLUMBIA, Mo. – Six former Tigers have been selected for induction into the University of Missouri Intercollegiate Athletics Hall of Fame. They represent the 32nd induction class since the Hall’s inception in 1990.

The 2022 class will be officially inducted on Friday, Nov. 18, 2022, at the Missouri Theatre in downtown Columbia. The awards ceremony is free and open to the public.

In recognition of the 50th Anniversary of Title IX, Mizzou Athletics will also honor trailblazing female student-athletes from the 1976-77 season. That season marked the first year Mizzou had a combined intercollegiate athletics department, eliminating separate men’s and women’s athletics programs. The 1979 gymnastics team and 1996 soccer team will be recognized as the inaugural years of those programs.

The six members of the 2022 class will also be recognized on Saturday, Nov. 19 at the Mizzou Football game against New Mexico State. Game time and television network will be announced when available.

The Mizzou Athletics Hall of Fame’s constitution and bylaws express its purpose – “…to recognize and honor those individuals who have made exceptional contributions to the achievements and prestige of the University of Missouri in the field of athletics, and who have continued to demonstrate in their lives, the values imparted by intercollegiate athletics.”