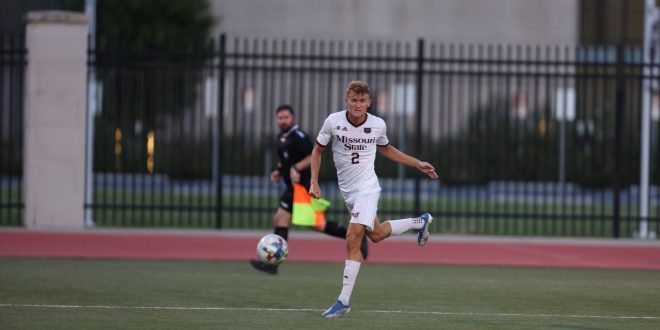 SPRINGFIELD – The Missouri State men’s soccer team begins Missouri Valley Conference play on Saturday night when the Bears round out their eight-game home stand against Evansville at 7 p.m.

Match Details
The Bears (4-1-2) will host Evansville (3-1-2) on Saturday at 7 p.m. at Allison South Stadium on Family Weekend. For all the latest information and in-game updates on the Missouri State men’s soccer team, visit MissouriStateBears.com or follow @MSUBearsMSoccer on Twitter and Instagram.

Promotions
Saturday night’s match is the team’s annual Nick at Night fundraiser. Fans are encouraged to come out to support MSU men’s soccer’s 12th man, Nick Heun, on his journey! Wristbands will be available for purchase along with other donating opportunities.

Quick Kicks
• The Bears’ defense is off to a dominant start this season. Their five shutouts are tied with four teams for second in the nation (.714). MSU is tied for ninth in the country in team goals against average (.571) and is outscoring its foes, 16-4.

• Ten of MSU’s 16 goals this season have come in the second half. The Bears have gone 4-0 in those matches.

• The Bears’ two ties this season are the most matches they’ve drawn since the 2018 season when the team recorded six.

Scoring Breakdown
• The Bears have eight different goal scorers through six games this season. Last year, MSU spread the wealth as well and finished the season with 16 different Bears finding the back of the net at least once.

• Jesus Barea leads the Bears’ scoring efforts this season with four goals. He scored two in MSU’s 7-0 win over CSUN on Sept. 16.

• Four of MSU’s five goal scorers have at least two goals each.

• The Bears lead the MVC with 16 goals this season. Evansville is second in the conference with 10.

• MSU has allowed the fewest goals so far this season in the Missouri Valley Conference, only conceding one through its first six matches (.167).

Take a Look Ahead
MSU hits the road for the first time this season when the Bears head to Bradley on Saturday, Oct. 1, at 7 p.m.