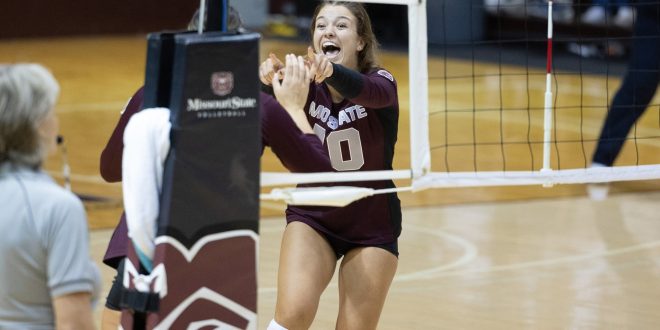 Storylines for the Weekend
1) Missouri State begins its 31st Missouri Valley Conference season with a visit to league newcomers Belmont and Murray State. The Bears and Bruins meet at 6 p.m. Friday in a battle for ursine supremacy in the league, and MSU plays the Valley’s other MSU at 7:30 p.m. Saturday. The Bears own a .683 all-time winning percentage in MVC action.

2) The Bears are in the midst of playing 11 consecutive matches away from Springfield, the longest streak since 14 straight to end the 2016 season and start 2017. The last time MSU had an in-season stretch away from Springfield this long was 12 in a row to begin the 1989 campaign.

3) MSU has 18 games scheduled in Missouri this season, with three-game tournaments at Missouri and Saint Louis in addition to 12 home contests.

5) The Bears rank 87th nationally with 15.11 digs per set and 47th in total digs. Those numbers come from a balanced defensive effort with six players averaging at least 1.76 digs per set.

6) Senior Azyah Green averaged 1.17 blocks per set last season, the highest figure at Missouri State since 2006. She led the Bears in blocking in each of her first three seasons, becoming the first player to lead the club three years in a row since All-Ameican Linette White did it in 2001, 2002 and 2003. She ranks 14th in school history with 388 career blocks and 11th with a 1.06 per set average.

7) Sophomore middle Maddy Bushnell set an MSU freshman record and led the MVC with a .343 attack percentage last season. Her efficiency ranked sixth overall for a season at MSU.