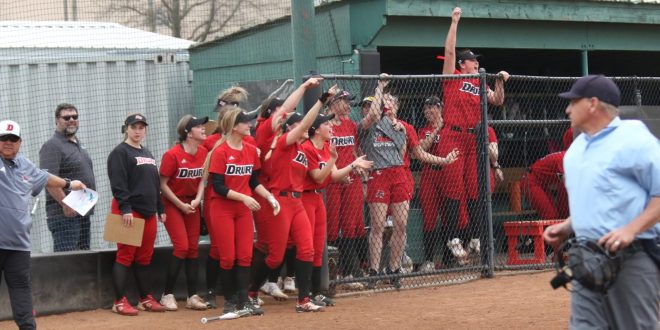 SPRINGFIELD, Mo.— Drury softball head coach Jerry Breaux announced the Panthers signing class for the 2023 season. DU will add three transfers and four freshmen to a squad that won a program-record 37 games and reached the NCAA-II Tournament for the first time in team history last year.

Victoria Garland, C/3B/Util., Evansville, Ind. (Murray State)
Victoria Garland played the last two seasons for Murray State, a program that won the Ohio Valley Conference and advanced to the NCAA Tournament in 2022. Garland played in 20 games and made six starts last season. She hit .120 and dove in a pair of runs. At Reitz High School in Evansville, Indiana, she was a First Team All-Metro selection and led her team to a 2019 city championship. Garland was a four-time All-City honoree and was named her team’s Defensive Player of the Year twice. She was summer softball for the Illinois Force, the same program that produced current Drury catcher Leaha Wininger. Garland will enter Drury as a junior and will major in Pre-Health.

“I chose Drury because they offer everything I’m looking for in a softball program, classroom, and in life,” said Garland.

Lindsay Henson, P/1B, Lawrenceburg, Ind. (Jones County CC)
Lindsay Henson was a Second Team All-American at the junior college level last year as a freshman playing for Jones County Community College. She hit .373 with 14 home runs and 53 runs batted in at the plate, and turned in an 8-0 record with three saves and a 4.26 earned run average in 13 appearances and eight starts as a pitcher. She also struck out 50 batters in 49.1 innings and posted a .761 slugging percentage with a .408 on-base percentage. Henson was named All-Conference and was an All-South Region selection while helping her team to a 26-2 league record and a 44-12 mark overall. She played for East Central High School in Lawrenceburg, Indiana, and was an all-conference selection for three seasons. She set her team’s career home runs record and helped the squad to a 26-2 record and a conference championship during her senior year. Henson will be a sophomore at Drury next season, majoring in Business Marketing.

“I chose Drury to transfer to because it was a great opportunity to continue my college softball career and continue my Business Marketing degree at a top university,” stated Henson.

Taylor Hartsell, OF, Livingston, Tex. (Angelina CC)
Taylor Hartsell racked up 63 hits in 49 games for Angelina College last season as her team went 38-16. From the lead-off spot in her team’s order, she hit .396 with 15 doubles, three triples, four home runs, and 35 RBI’s while scoring 48 runs. Hartsell played for Livingston High School in Texas and was named Second Team All-District in her senior year. She played club softball for Texas Strike Force and Texas Slam. Hartsell will major in Biochemistry at Drury and have three years of eligibility for the Panthers.

“I chose Drury as my transfer school because it will be a great place for me as a student-athlete and help me get my best education,” Taylor said.

McKenna Becher, OF/C/1B, Firth, Neb. (Norris HS)
McKenna Becher was named First Team All-State by the Omaha World-Herald and was a Second Team All-State selection by the Lincoln Journal-Star last year after hitting .410 with eight homers and 31 RBI’s for Norris High School. She belted 17 extra-base hits and was a three-time Academic Letter Winner and was a First Team All-Conference pick in 2022. She will major in Graphic Design at Drury.

“I chose Drury because I loved how welcoming everyone was,” said Becher. “From the moment I stepped on campus, I felt like I belonged.”

Sophia Leutticke, OF, Chillicothe, Mo. (Chillicothe HS)
Sophia Leutticke has been an All-State selection in Missouri for two years and, last season, helped Chillicothe to a state runner-up finish in Class 3 and a 30-5 record. The left-handed hitting Leutticke hit .632 with three home runs and 27 RBI’s. She put up 72 hits in 35 games while stealing 25 bases and posting a .884 slugging percentage. She was a three-time all-conference and all-region pick. Leutticke set school records for batting average, hits, and runs. She played summer softball for the Miami Express and will major in Elementary Education at Drury.

“I chose Drury because it has a great program for Education, and for the tremendous softball program,” said Sophia.

Dakota Hale, OF, Nixa, Mo. (Nixa HS)
Dakota Hale hit .427 with six homers and 32 RBI’s and helped Nixa reach the Class 5 state quarterfinals last year. She was an All-Central Ozark Conference selection while also earning a spot on the All-Region and All-District teams. Hale played club softball for the Midwest Batbusters and will major in Pre-Law.

“I chose Drury because it’s a beautiful campus and has all the tools I need and more to graduate with the degree I want,” stated Hale. “Drury has an amazing softball program that aligns with my goals. I believe in the staff, and I know they will push the team and me to be our best.”

Lillian Hinson, INF, Vinita, Okla. (Ketchum HS)
Lillian Hinson was named All-District at Ketchum High School last season and was an All-Conference pick in basketball. She was the Salutatorian of her graduating class and played summer softball for the Oklahoma Storm. She will be a Media Communication & Journalism major at Drury.

“I chose Drury because the softball program is great, and the campus is beautiful,” said Hinson. “Everyone I visited with on my campus visit really made me feel comfortable and at home.”


“This recruiting class will fill some holes and strengthen those areas of the game our team needed,” said coach Breaux. “We’ve added experience, pitching, speed, and offense to our returning group. I look for these signees to blend in very well with our great class of returning players. Our returning players have done an excellent job for us, and I look for these additions to help maintain as well as accelerate the momentum we have from last season. It’s a great day to be a Panther!”

Breaux completed his sixth season as head coach at Drury and his 29th year as a collegiate head coach. The Panthers went 37-17, 21-7 in the Great Lakes Valley Conference, reached the NCAA-II Tournament for the first time in team history, and advanced to the round of 32.