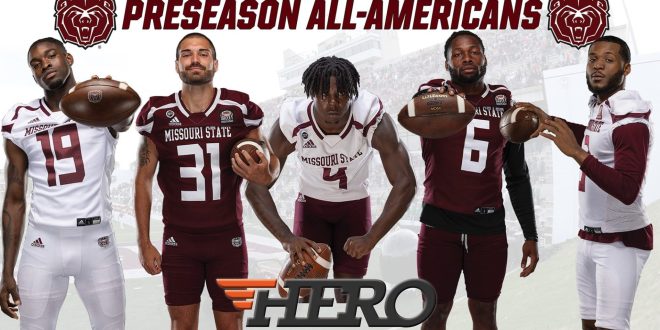 Shelley was named as the 2021 MVFC Offensive Player of the Year and MVFC Newcomer of the Year. He is coming off a 2021 campaign in which he threw for a school-record 3,347 yards and racked up another program record 3,789 yards of total offense, both of which led the conference. He is on the 2022 Walter Payton Award Preseason Watch List and was also a finalist for the Payton Award last season, finishing 10th. Shelley finished his first season at MSU ranked 11th nationally in points responsible for (194), seventh in yards per completion (14.24), ninth in passing yards (3,347), 14th in passing yards per game (278.9), 18th in passing touchdowns (22), and 22nd in passing efficiency (142.69). Shelley engineered four game-winning drives in the fourth quarter in 2021 and was a three-time MVFC Newcomer of the Week. Stats Perform recently named Shelley to its Preseason All-America second team.

Burkett ranked second in the nation with a school-record punting average of 46.2 per attempt last season, while helping the Bears rank second nationally as a team in net punting (42.81). He had 16 punts of 50 yards or better with 15 attempts downed inside the opponents’ 20-yard line. In addition to being an All-Missouri Valley Football Conference first-team selection, Burkett made four FCS All-America teams in 2021, including second-team selections by the AFCA, Stats Perform and Hero Sports, and a third-team selection by the Associated Press. He is on the 2022 FCS National Punter of the Year Watch List and was named to both the Athlon Sports and Stats Perform Preseason All-America first-team lists this season.

After earning All-MVFC first-team honors at two positions (defensive back and return specialist) in 2021, Braswell was named as an All-America second-team selection by the AP and Stats Perform after Hero Sports also named him to its Sophomore All-America Team at both positions. Defensively, Braswell finished third in the Missouri Valley Defensive Player of the Year voting and ranked seventh nationally — and tops in the MVFC — in passes defended per game (1.4). He also snagged four interceptions and brought down 44 ball carriers with 33 solo stops. On special teams, his 29.4 kickoff return average ranked fifth nationally and tops in the MVFC. He was also a two-time MVFC Special Teams Player of the Week. Stats Perform named Braswell to its Preseason All-America second team last week, while he is a also on the Buck Buchanan Award Preseason Watch List.

McDonald is a third-year squad member who earned All-Missouri Valley Football Conference honorable mention laurels in 2021 and second-team honors in 2020-21. He finished last season ranked fourth on the team with 64 total stops to go with 45 solos, 9.5 tackles for loss and 10 passes defended. He ranked eighth in The Valley in passes defended (0.83) with 8 PBUs and a pair of interceptions, while finishing 14th in the conference in tackles for loss (0.79) and 33rd in tackles per game (5.3). McDonald was recently named as a co-captain for the 2022 season, sharing that distinction with Shelley, Kevin Ellis and Landon Bebee.

Missouri State is ranked as high as No. 5 in the national FCS preseason polls and kicks off the 2022 season on Thursday, Sept. 1 at Central Arkansas. The club’s home opener is a week later on Sept. 8 in a playoff rematch against UT Martin at Robert W. Plaster Stadium.