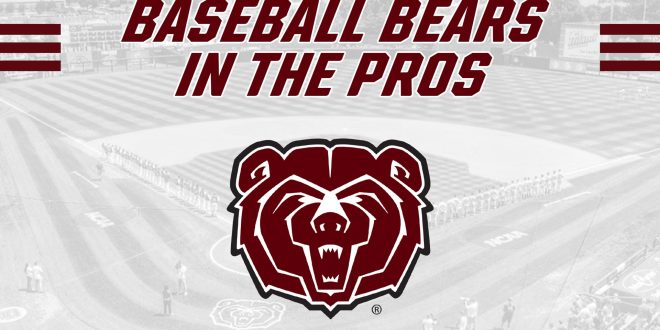 SPRINGFIELD – Missouri State currently has 15 former baseball players who signed professional contracts out of the school playing in various leagues and levels throughout the country. Below is a list of those individuals with links to their profiles. Summaries are accurate as of August 10, 2022.

Drake Baldwin (2020-22) – MiLB Profile – A third round pick in last month’s draft and the highest-drafted catcher in school history, Baldwin went 3-for-8 in three Florida Complex League games and was promoted to Atlanta’s Single-A Augusta GreenJackets on August 8. He went 2-for-5 and scored twice in his Augusta debut on August 9.

Matt Hall (2013-15) – MLB Profile | MiLB Profile | KC Monarchs Profile – Hall, who led the NCAA in strikeouts in 2015, is currently pitching for the Kansas City Monarchs of the American Association. He had stints in the majors in 2018, 2019 and 2020, pitched for Boston’s Triple-A club in 2021, and appeared in two games for San Francisco’s Triple-A affiliate in Sacramento in June of this season. Hall has been with the Monarchs since May, aside from the brief stint in Triple-A, going 6-2 with a 1.08 ERA and 73 strikeouts in 58 innings.

Jon Harris (2013-15) – MiLB Profile | KC Monarchs Profile – The former first-round pick has reunited with MSU teammate Matt Hall with the American Association’s Kansas City Monarchs this summer. In 14 starts, Harris is 4-2 with a 4.92 ERA and 58 strikeouts in 75 innings.

Dakota Kotowski (2019-22) – MiLB Profile – Kotowski signed a free-agent deal with Philadelphia in July and was assigned to the Phillies’ Florida Complex team last week. In his first three professional games, the slugger is 4-for-12 with a double.

Hayden Juenger (2019-21) – MiLB Profile – A sixth-round pick in 2021, Juenger has quickly advanced to the Triple-A level in Toronto’s organization. He started 17 of his 20 games with Double-A New Hampshire, striking out 67 batters and allowing just 40 hits in 56 innings. In five games at Triple-A Buffalo, Juenger has a 1.74 ERA and 11 strikeouts in 10.1 innings, all in relief.

Jake McMahill (2022) – McMahill signed a free agent contract with Cincinnati in July and has yet to make his professional debut. He is expected to begin his pro career with the Reds’ Arizona Complex League team.

Drew Millas (2017-19) – MiLB Profile – An All-American for the Bears in 2018, Millas has played at three different levels in Washington’s organization this summer, peaking in Double-A. He is currently with the High-A Wilmington (Del.) Blue Rocks, and is hitting .225 with five homers and 29 RBI for the full season.

Davis Schwab (2018-19) – MiLB Profile – Schwab is pitching for Atlanta’s High-A Rome Braves for the second consecutive season. The left-handed, who was drafted in the 37th round in 2019, is 2-0 in 28 relief appearances this season, throwing 41.2 innings and striking out 48 batters.

Luke Voit (2010-13) – MLB Profile – Voit was recently traded from San Diego to Washington as part of the deal that sent all-star Juan Soto out west. Now in his sixth MLB season and with his fourth club, Voit is batting .230 with 15 homers and 51 RBI. In nearly 1,500 career at bats in the big leagues, Voit has 88 home runs and 254 RBI, and led the majors in homers in 2020 as a member of the New York Yankees.