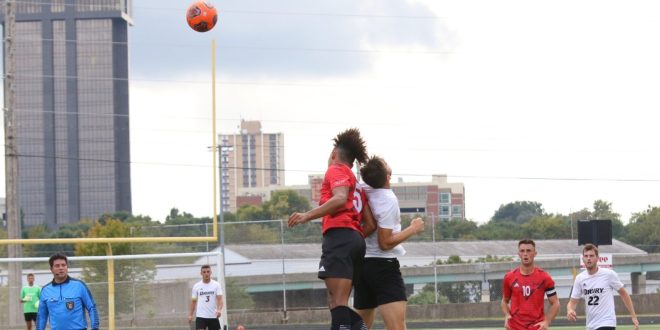 SPRINGFIELD, Mo.— The Drury men’s soccer team will open the 2022 season with an exhibition game on Saturday against the St. Louis City FC Under-20 squad. St. Louis City FC is a Major League Soccer expansion team that will open play in the spring of 2023, and the Panthers will take on their Under-20 developmental team. The game will take place at the Creve Coeur Soccer Complex in Maryland Heights, Missouri, at 6 pm.

Drury will host Neosho County Community College in an exhibition game at Lake Country Soccer Complex on Aug. 16 at 3 pm, and will wrap up the preseason against Harding on Aug. 20 at 4 pm at Harrison Stadium.

The Panthers start the regular season on Aug. 26 when they face Upper Iowa at the Lake Country Soccer Complex at 7:30 pm.

Drury will open their Great Lakes Valley Conference schedule on Sept. 11 at Quincy. The GLVC has three teams in the NCAA-II preseason top 25. Indianapolis is ranked fourth in the nation, Illinois Springfield is ranked 16th, and Maryville is 25th in the preseason poll. The Panthers face Maryville on Oct. 7 at home, are at UIndy on Oct. 14, and will host UIS on Oct. 21.

Drury returns 13 lettermen from a team that went 8-7-4, 7-3-4 in the GLVC, and advanced to the semifinals of the league tournament. Head coach Ben Taylor returns for his sixth year leading the program.