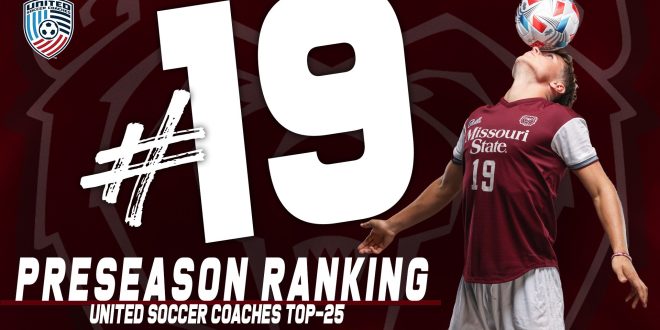 The ranking marks the third-straight year the Bears have begun their season in the top-25. MSU finished the 2021 season with a 17-2-0 overall record, that saw the squad earn regular-season and tournament championships before falling to Creighton in the first round of the NCAA Tournament.

Missouri State is the only Missouri Valley Conference team featured in the preseason poll. Tulsa, who the Bears face off in their seventh regular-season match, comes in at No. 11 in the top-25.

The Bears return a core of players for the 2022 season including their top-two leading scorers as well as their leader in assists. Jon Koka and Jesus Barea will be back in action for the Bears after combining for 11 of the teams’ goals, while Kian Yari added a team-high eight assists.

MSU’s experience will also feature five all-conference players, including Yari, who was named the 2021 Midfielder of the Year for his efforts.

The Bears kick off the 2021 regular season at home on Thursday, Aug. 25 at 7 p.m. against UC Santa Barbara.