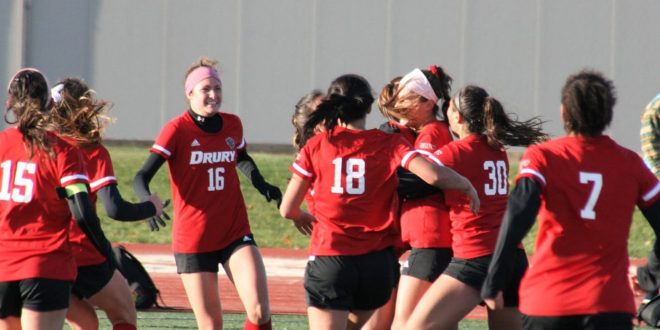 The Drury Dozen is an annual list of our favorite moments of the year from Drury Athletics. The list is not necessarily the most significant events but the special games and moments we will always associate with 2021-22.

We’ll provide honorable mention selections later in the countdown, but, for now, here is our runner-up entry from 2021-22:

Nov. 18, 2021 – Ashland, Ohio
For those at the NCAA-II Women’s Soccer Tournament watch party earlier in the week, they saw a Drury team add a chip on their shoulder.

The Panthers earned an automatic bid to the national tournament by winning the GLVC Tournament and landed in the national field for the first time since 2007. When Drury’s name was announced on the national bracket, though, the team didn’t exactly celebrate. They looked a little irritated at their seeded and being shipped halfway across the country to northern Ohio.

A few days later, the Panthers played like a team that wasn’t just happy to be in the tournament. They forced the sub-regional host and 15th-ranked Ashland into double-overtime, then senior Chloe Cash sent Drury to the next round with the game-winning goal.

The win continued the team’s Cinderella run for a program that was winless just three years prior to winning a conference championship and reaching the round of 32 in the NCAA-II Tournament.