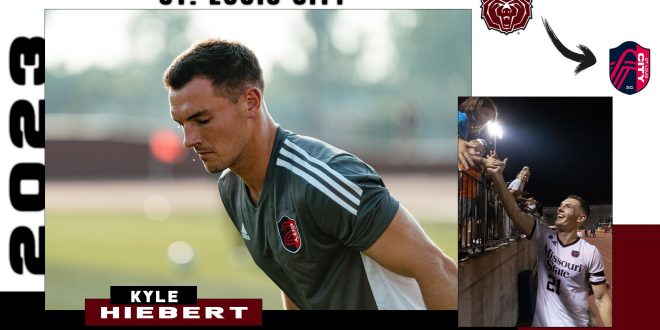 Hiebert’s professional contract is the expansion team’s first player signed from the MLS Next Team to the MLS First Team. The club’s first full season will begin in 2023. He is the 11th Missouri State men’s soccer player to sign with a major league soccer club.

“We are very excited and proud to keep Kyle in the STL family after the hard work he has put in this season,” said Sporting Director Lutz Pfannenstiel. “Kyle’s leadership and quality on the field are attributes of a role model that we want to continue adding to this club. We had no doubts that Kyle could take the next step and are excited for how he finishes out the season and prepares for 2023.”

The three-time Missouri Valley Conference Defender of the Year was instrumental in the Bears capturing three-straight MVC regular-season titles from 2019-21.

“Kyle Hiebert is a tremendous example of what often happens when a man with talent, dedication, and ambition pursues his goals consistently over time,” said head coach Michael Seabolt. “He committed himself to being the best Bear he could be on the field, making Missouri State University and Springfield his home and maximizing his educational opportunities. He and Cassidy wanted to make Missouri their long-term home and it is exciting to see they will have that opportunity. I won’t be surprised to see Kyle represent Canada at senior level in the future as well.”

Hiebert, a native of La Salle, Manitoba, was a key part of MSU’s backline during his time in Springfield. He started in 18 games during the 2021 season, appearing in all 19 and clocking a team-high 1,625 minutes. He is the first-ever MVC player to win three-straight Defensive Player of the Year awards. During his final season with the Bears, he helped the team to a .573 goals against average good for No. 3 in the nation. Hiebert is also a five-time CoSIDA Academic All-American and a three-time United Soccer Coaches All-American.

Following his time as a Bear, Hiebert joined the Major League Soccer Next Pro expansion franchise, St. Louis City 2, and has helped them to a 11-4-2 record in the team’s first season.

“We are extremely excited for Kyle and this wonderful opportunity he has earned,” said Missouri State Athletic Director, Kyle Moats. “St. Louis City not only has a great player but a first-class person representing them. I can’t wait to watch him and the new franchise next year.