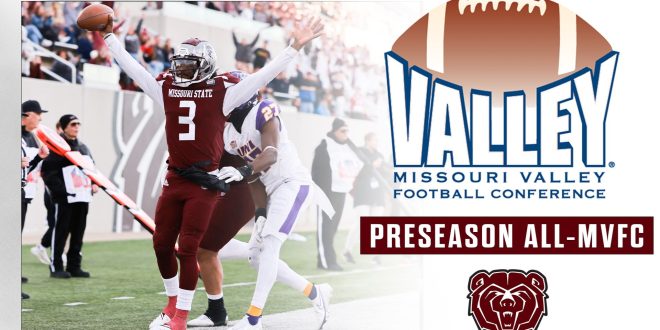 It is the highest the Bears have been ranked in the preseason MVFC poll since 1996 (second).

Shelley is coming off a record-breaking debut campaign with the Bears in which he earned MVFC Offensive Player of the Year and MVFC Newcomer of the Year honors while earning All-MVFC first-team distinction. Scott, Ellis, Burkett and Braswell were also All-MVFC first-team selections in 2021 with Bebee and Pizano securing second-team laurels, and McDonald garnering honorable mention status.

Coach Bobby Petrino enters his third season as Missouri State head coach with 17 starters and 41 lettermen returning from an 8-4 squad that finished as runners-up in the Missouri Valley while making the NCAA FCS Playoffs for the second straight season.

The Bears kick off the 2022 season on Thursday, Sept. 1 at Central Arkansas before the club’s home opener a week later on Sept. 8 in a playoff rematch against UT Martin at Robert W. Plaster Stadium. Missouri State season tickets are currently on sale by calling (417) 836-8899, with single-game tickets set to go on sale August 8 at MissouriStateBears.com or by calling (417) 836-7678.