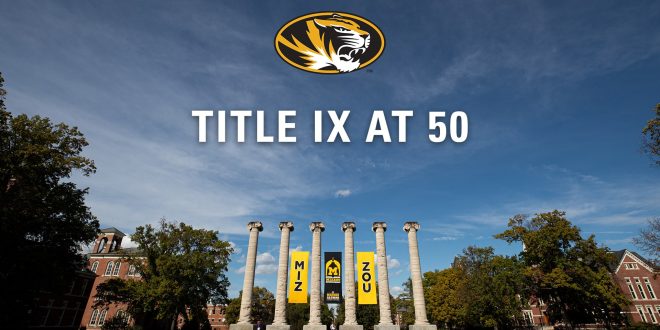 Throughout 2022, Mizzou Athletics is celebrating the 50th anniversary of Title IX—groundbreaking legislation which paved the way for greater resources and female participation in intercollegiate athletics. Every day, our Mizzou female student-athletes harness the power of practice, preparation and competition to grow personally and professionally. They make our university, the state of Missouri and all of us so very proud.

COLUMBIA, Mo. – Fifty years ago, on June 23, 1972, 37 words changed the course of women’s sports at the University of Missouri and nationwide.

“No person in the United States shall, on the basis of sex, be excluded from participation in, be denied the benefits of, or be subjected to discrimination under any educational program or activity receiving Federal financial assistance.”

Mizzou and all of college athletics celebrate the 50th anniversary of the Patsy T. Mink Equal Opportunity in Education Act, better known as Title IX, this week. The original bill was signed on June 23, 1972. The Title IX legislation paved the way for greater resources and female participation in college athletics. While tremendous progress has been made on behalf of female athletes over the past 50 years, there is more work to be done.

During 2022, Mizzou will celebrate Title IX with storytelling, on-campus events and in-game recognitions set for this summer and fall.

Our women’s programs and female student-athletes are no strangers to success. In the past year alone, Mizzou Softball hosted both NCAA Regional and Super Regional games and track & field alumna Karissa Schweizer proudly represented Mizzou and the United States in the Summer Olympics. Last fall, Missouri native and former women’s basketball standout Sophie Cunningham led the Phoenix Mercury to the WNBA Finals. In December, the Mizzou women’s basketball squad made history by defeating top-ranked South Carolina inside Mizzou Arena. And last winter, the Tigers’ gymnastics team made its first trip the NCAA Championship semifinals in over a decade.

CELEBRATION OF WOMEN’S SPORTS FUND
In honor of our female student-athletes and to position Mizzou for even greater success in women’s athletics in the years ahead, please consider making a gift of $50 (or amount of your choosing) to the Tiger Scholarship Fund’s Celebration of Women’s Sports Fund. Your donation will directly impact the academic and athletic experience of current and future Mizzou student-athletes.

Follow Mizzou Athletics all year long as we celebrate 50 student-athletes, coaches and friends of women’s sports in honor of the 50th anniversary of Title IX.