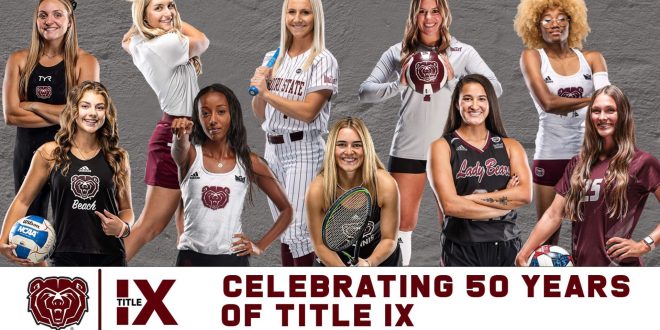 To celebrate the 50th anniversary of the signing of Title IX into law on June 23, 1972, Missouri State will be honoring some of its greatest pioneers in women’s athletics over the span of 50 weeks. Although certainly not inclusive of every individual who has contributed to the success of women’s athletics at Missouri State, the list of coaches, student-athletes, teams and contributors below represent some of our most memorable over the last 50+ years.

No Title IX retrospective or list of women’s athletics pioneers anywhere in the country would be complete without Dr. Mary Jo Wynn. From 1957 until her retirement in 1988, Wynn was the face of women’s athletics on our campus. She worked as a teacher and coach and helped make MSU a dominant program in the fledgling years of women’s athletics, then into the AIAW era, and later as Division I members of the Gateway and Missouri Valley Conference. Wynn organized women’s athletics competition in 1958 with the founding of the volleyball and tennis teams, which she coached until 1972 (volleyball) and 1975 (tennis). She also coached swimming and track. She was named the first MSU director of women’s athletics in 1975, concluding her tenure as senior associate director of athletics and senior woman administrator. With her vision and leadership, Missouri State became an AIAW power, winning 18 state championships, 14 regional crowns and two national titles with six All-Americans and 14 Academic All-Americans. After being honored with numerous lifetime achievement honors and hall of fame inductions, Wynn was named as a Missouri Sports Legend in 2014 and passed away in 2019 at the age of 87.