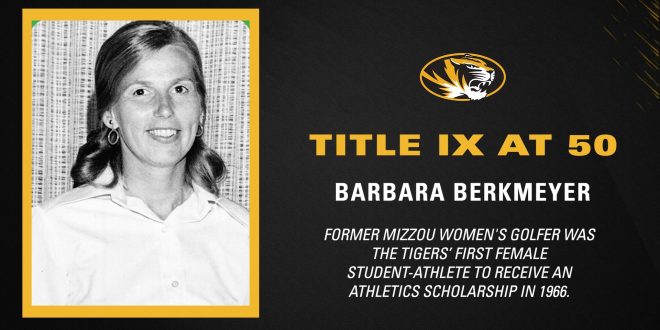 Throughout 2022, Mizzou Athletics will celebrate the 50th anniversary of Title IX – groundbreaking legislation which paved the way for greater resources and female participation in college athletics. Every day, our female student-athletes harness the power of practice, preparation and competition to grow personally and professionally. They represent Mizzou and the entire state of Missouri on the national stage at the highest level of college athletics.

Mizzou and all of college athletics will celebrate the 50th anniversary of the Patsy T. Mink Equal Opportunity in Education Act, better known as Title IX this week. The original bill was signed on June 23, 1972.

Berkmeyer, a native of St. Louis, started a long amateur golf career at Mizzou, going on to cement a legacy of sustained, championship-level play over a period of more than five decades.

A Missouri Women’s Golf Association article called Berkmeyer a ‘fierce competitor and wonderful example of true sportsmanship’ while also discussing her mentoring of younger players and service to golf throughout the state of Missouri. The story went on to say that her commitment, kindness, dedication, patience and perseverance are unsurpassed. In 2015, the MWGA honored her with their highest honor, the Harriett Duncan Award.

CELEBRATION OF WOMEN’S SPORTS FUND
Please consider making a gift of $50 (or amount of your choice) to the Tiger Scholarship Fund’s Celebration of Women’s Sports Fund in honor of our female student-athletes’ accomplishments and to position Mizzou for even greater success in women’s athletics in the years ahead. Your donation takes less than five minutes to make and will directly impact the academic and athletic experience of current and future Mizzou student-athletes.

Please visit the Celebration of Women’s Sports Fund webpage or click the button below to make your gift now.

Follow Mizzou Athletics all year long as we celebrate 50 student-athletes, coaches and friends of women’s sports at Mizzou in honor of the 50th anniversary of Title IX.