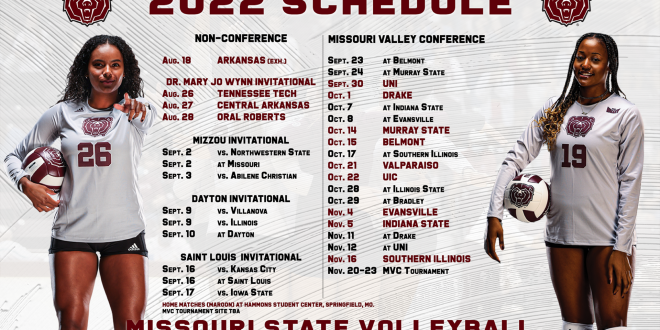 SPRINGFIELD – Missouri State’s 2022 volleyball schedule is complete and includes 12 matches at Hammons Student Center among the 30 contests on the regular season slate.

The Bears will stay in the Show-Me State the following week when they travel to the Mizzou Invitational Sept. 2-3 to face Northwestern State, Abilene Christian and Missouri for what will be the first regular season meeting between the Bears and Tigers since 1998, though they have met twice in the NCAA Tournament since then.

MSU will begin the 18-match Missouri Valley Conference season on the road against Valley newcomers Belmont and Murray State on Sept. 23 and 24.

With 12 teams in the league in 2022, Missouri State will play an 18-game conference slate with home-and-home series with Belmont, Murray State, UNI, Drake, Indiana State, Evansville and Southern Illinois, with single matches at Illinois State and Bradley and at home against Valparaiso and UIC.

The MVC Tournament has moved to the week before Thanksgiving and will take place Nov. 20-23 at a site to be determined.

Missouri State will also host Arkansas in an exhibition match on Aug. 18.

Season tickets are available by calling Duane Miller at 417-836-8899. Single-game tickets will be available at a later date.