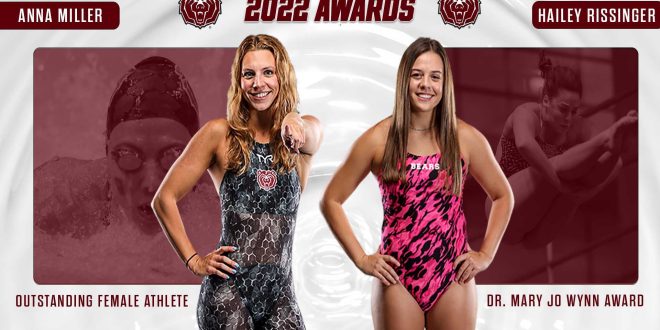 SPRINGFIELD — A pair of standouts from the women’s swimming and diving team are the recipients of the 2022 Missouri State Outstanding Female Athlete Award and Dr. Mary Jo Wynn Scholar-Athlete Award as announced by MSU Athletics on Thursday (June 16).

This season, Miller competed at the NCAA Championships in Atlanta in the 100-yard freestyle, becoming the Bears’ first-ever women’s NCAA national qualifier. In addition to holding school records in the 50 freestyle, 100 freestyle and 100 butterfly, Miller dominated at the Missouri Valley Conference Championships in her career, racking up 27 gold medals at the conference meet, including 11 individual titles.

The award is named in honor of the late Missouri State educator, coach and athletics administrator, Dr. Mary Jo Wynn, who became the first female to be named as a Missouri Sports Legend by the Missouri Sports Hall of Fame in 2014.

Rissinger, who also landed on the MVC Honor Roll in 2021 and 2022, graduated in August (2021) with a 4.00 grade-point average and an undergraduate degree in Sports Management. She was part of two MVC championship teams during her two seasons with the Bears. She is the third swimming and diving team member to earn the Wynn Award in the last six years and the seventh Wynn Award honoree from her sport, joining Erica Adams (2002), Cara Belcher (2009), Chelsea Ray (2010), Katharina Voelkel (2011), Shawna Elsey (2017) and Allee Armitage (2021).