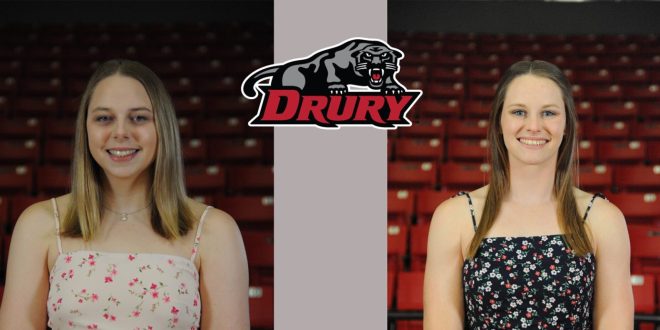 SPRINGFIELD, Mo.— Drury women’s swimmers Bec Cross and Allison Weber were named Academic All-Americans in the At-Large sports category by CoSIDA in a national vote of sports information directors. Both were named to the Academic All-America Second Team in NCAA-II. The award recognizes performance in academics and athletics and the at-large program combines the sports of golf, lacrosse, swimming & diving, tennis, and wrestling into one category.

Bec Cross completed her senior season with the Panthers and won multiple All-America honors in 2021-22. The native of Canberra, Australia, finished fourth in the NCAA-II Championship meet in the 400 Individual Medley, ninth in the 200 Breaststroke, and 16th in the 500 Freestyle. She was second in the GLVC Championships in the 200 Breast, second in the 400 IM, and third in the 200 IM. Cross was an Exercise Physiology major and carried a 3.93 grade point average. Cross is one of only 11 members of this year’s At-Large team to win multiple Academic All-American honors. She was also a CoSIDA Academic All-American last year.

The Drury women’s swimming & diving team won the GLVC championship in February and finished fourth at the NCAA-II Championships.