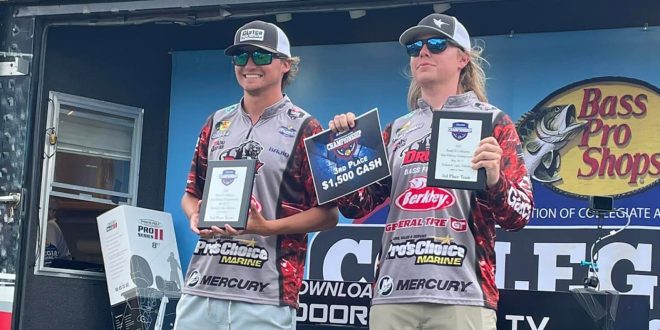 In the final tournament for the 2021-22 season, Bila and Chambers caught their limit of 10 fish on both days for a total of 37.33 pounds. Bryar Chambers and Clent Blackwood from Wallace State won the event landing a total of 20 fish and 46.91 pounds. Logan Parks and Tucker Smith from Auburn finished second with 44.69 pounds from 20 fish.

The Panthers strong finish at the ACA National Championship resulted in a number six national ranking for Drury in the final Bass Pro Shops School of the Year standings. Their number six ranking marks the best finish in the program’s seven-year history.

Montevallo (Ala.) finished first to win this year’s national championship. Auburn finished second and McKendree ended the year ranked third. Adrian (Mich.) was fourth and Carson-Newman (Tenn.) was fifth, rounding out the teams in front of Drury. The Panthers finished ahead of seventh-place Blue Mountain State and North Alabama in eighth.

Head coach Rick Emmitt has guided the program since its inception in 2015-16 and has led the Panthers to a top-10 national finish for three straight seasons.