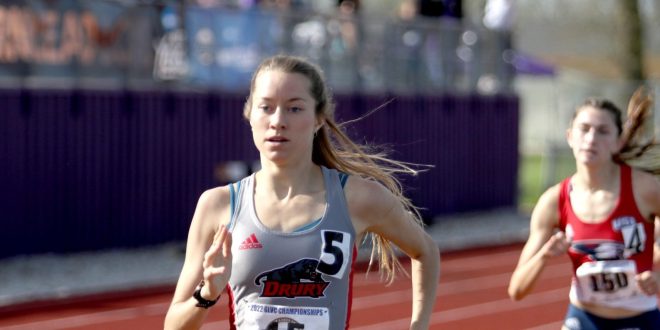 ALLENDALE, Mich.— Drury women’s distance runner Katie McCune will compete for a national championship in the 800 meter run on Saturday after advancing through the preliminary heats on Friday at the NCAA-II Track & Field Championships in Allendale, Michigan.

Competing in the third of three heats, McCune posted a time of 2:08.32 and finished third in the heat. Her time was the fourth-best among the 24 runners in the three heats, and she earned an at-large bid to the finals. The Springfield native narrowly missed an automatic bid as she finished just 0.09 seconds behind Isabelle Brezinka of Minnesota-Duluth for second place in the heat. The top two in each of the three heats automatically qualify for the finals along with the next three fastest times overall.

Drury sent three student-athletes to this year’s NCAA-II Track & Field Championships marking the first time in nine years the Panthers have been represented at the national meet, and it is the first time DU has sent multiple participants to nationals. On Thursday, Claire McCune was 18th overall in the preliminaries of the 1500 meter run. Jolie McClellan will compete in the javelin on Saturday in an event slated for a 12:30 pm start.

Links to live updates of the NCAA-II National Championships can be found here.