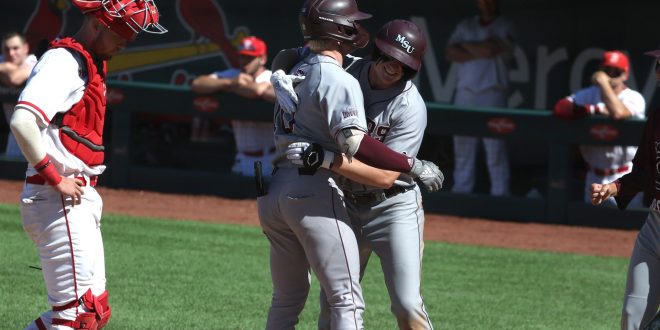 SPRINGFIELD – Missouri State set the Hammons Field scoring record and moved to 3-0 in the Missouri Valley Conference Tournament Friday with a 19-3 seven-inning victory over Bradley.

The sixth-seeded Bears (28-26) led 2-0 after two batters thanks to Drake Baldwin’s 16th home run of the season, 17-0 after three innings and 19-1 after four with every member of the starting lineup scoring at least one run.

Missouri State will play the winner of Friday night’s game between No. 2 Evansville and third-seeded DBU at 3 p.m. Saturday.

Notables:
•    Missouri State hit five home runs for the fifth time this season and moved its tournament total to 12 in three contests. Round-trippers came from Baldwin, Cam Cratic, Walker Jenkins, Spencer Nivens and Grant Wood. The Bears hit two bombs in the first inning and three in the third.
•    Wood’s grand slam was the 10th in MSU’s MVC Tournament history.
•    Wood’s career-high six RBI gave the Bears six players with 40 RBI on the season, a first since 2002.
•    The 19 runs are the third-most Missouri State has scored in 109 all-time MVC Tournament games, and the 16-run margin of victory tied for the second-largest.
•    The 3-0 tournament start is a first for Missouri State since the Bears went 4-0 for the 2018 championship.
•    The 11-run third inning tied a season-best as well as the MVC Tournament record for runs in an inning, last done by MSU in 2010.
•    The Bears exceeded 10 runs in a game for the 16th time this year.
•    The previous Hammons Field scoring record came in an 18-11 Missouri State win over Kansas on April 6, 2016.
•    Spencer Nivens scored four runs to tie four others for the school’s MVC Tournament record.
•    Caden Wilson was the winning pitcher in relief, allowing a run on two hits with career highs of three innings and five strikeouts.
•    Adam Link struck out four and allowed one hit in three innings in the start.
•    The Bears bashed 10 extra-base hits, a season high.
•    Nivens, Baldwin, Mason Greer, Cratic, Wood and Jenkins each had multiple hits.
•    Baldwin, Greer, Cratic, Wood and Jenkins each drove in at least two runs.