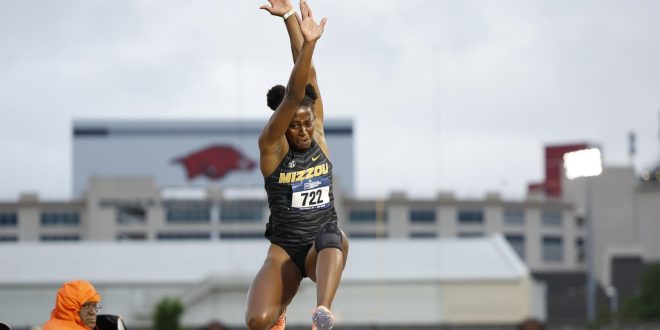 FAYETTEVILLE, Ark. – University of Missouri track and field saw three of its’ student-athletes punch their tickets to the NCAA Championships on day two of the NCAA West Prelims. The four-day meet is being held at Arkansas’ John McDonnell Field.

Ayele Gerken finished third in the long jump to advance to the national meet in June. Her third and best jump of the competition – 6.48m / 21-3.25 – is a personal best and moves her to No. 2 in school history. The mark replaces her previous best of 6.30m / 20-8, set at the 2022 SEC Outdoor Championships. The final of the long jump – with a field of 24 – will be held Thursday, June 9, at Oregon’s Hayward Field.

Sophia Rivera and Ava Curry both advanced to the NCAA Championships in the javelin. Rivera was eighth with a season-best throw of 51.68m / 169-7 on her second attempt of the day. On her first attempt of the day, Curry tossed a 50.36m / 165-3, good for 12th-place finish. The final of the javelin will also be held Thursday, June 9. Rivera was a 2019 All-American after finishing sixth at the national meet. Curry advances to final round for the first time in her career.