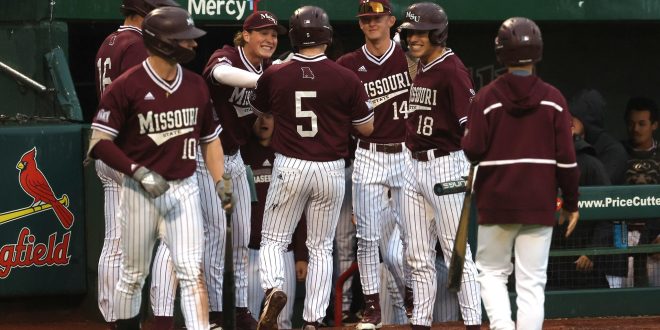 SPRINGFIELD – In a game that included a three and a half-hour rain delay and an overnight suspension due to weather, Missouri State came out on top by a 9-4 final over Illinois State Wednesday in the opening game of the Missouri Valley Conference Baseball Championship at Hammons Field.

The Bears (26-26) got a solid start from Ty Buckner, who faced 10 batters in three innings to run his season line to 12.1 scoreless frames before leaving with a 2-0 lead thanks to Walker Jenkins hitting an RBI double in the third and scoring on a Spencer Nivens sacrifice fly.

The seventh-seeded Redbirds (20-31) scored four runs on five hits in the fifth inning to lead 4-2 before the rain came and caused a 3-hour, 35-minute delay.

Missouri State homered in four consecutive innings after the resumption, with Drake Baldwin’s 15th of the season closing the gap to 4-3 in the bottom of the fifth.

Cam Cratic gave the Bears the lead with a two-run shot in the sixth, and Mason Greer and Will Duff added two-run bombs of their own in the seventh and eighth frames to give the Bears 83 on the season, the program’s highest total since leading the nation with 144 in 1999.

Riyan Rodriguez (3-0) took the mound after the first delay and allowed a double to the first batter he faced but no more hits in three shutout innings with five strikeouts.

Rain came again after the eighth inning, nearly six hours after the game began, and the contest resumed at 10:15 a.m. Wednesday with Jake McMahill tossing a scoreless top of the ninth, with the final out taking place nearly 21 hours after Tuesday’s 1:33 p.m. first pitch.

The sixth-seeded Bears advance to the double-elimination bracket and will know their next opponent and game time after Wednesday’s game between No. 5 Indiana State and eighth-seeded Valparaiso.