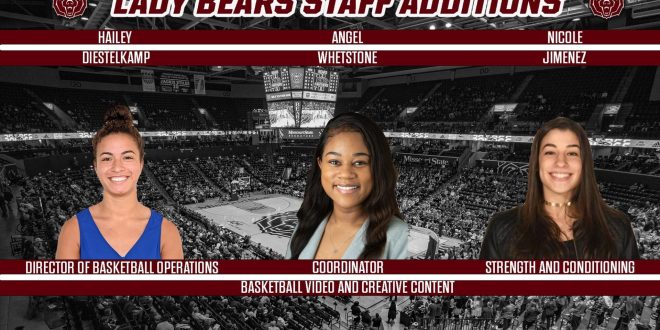 Jimenez comes to Springfield after recently serving in the same role at Sacred Heart University in Fairfield, Conn., where she managed the strength and conditioning efforts for women’s basketball, women’s rugby and women’s volleyball.

Prior to her stint at Sacred Heart, Jimenez participated in a strength and conditioning internship at the University of Connecticut, serving as the primary intern for UConn women’s basketball. In her role, Jimenez observed and analyzed data to create weekly goals as well as return-to-play guidelines for student-athletes, among other responsibilities.

Jimenez was also a graduate assistant at Springfield (Mass.) College, where she handled the strength and conditioning efforts for multiple sports. She has also completed internships at Elon University, Springfield College and Rutgers.

She was also a student-athlete herself, as she played basketball two seasons at Broward College (Fla.) before playing her final two seasons at Seton Hall. In her senior season at SHU, she started 31 games and averaged 12.2 points per game as the Pirates made a WNIT appearance.

Jimenez graduated from Seton Hall University with a bachelor’s degree in Social and Behavioral Science in 2019, before obtaining a master’s degree in Strength and Conditioning from Springfield College in 2021.

Diestelkamp arrives back to the city of Springfield from Saint Louis University where she most recently served as a graduate assistant for the Billikens. While at SLU, Diestelkamp assisted with game-day preparation, player development, setting up community service activities, and coordinating post game and travel meals.

Before entering into the coaching realm, Diestelkamp had a decorated playing career at Drury University in Springfield. In her career at Drury, the Lady Panthers owned a 128-8 record and her jersey is now retired after she ended her career as the team’s all-time leading scorer (2,321) and rebounder (1,101).

The Owensville, Mo., native averaged 21.6 points, 7.4 rebounds and 2.8 steals, while shooting .522 from the field for an undefeated (32-0) Great Lakes Valley Conference champion team as a senior in 2019-20. Drury finished its season as the number one team in NCAA-II.

Diestelkamp graduated from Drury with her bachelor’s degree in Psychology with a minor in Criminology in 2020, and will graduate from SLU with a master’s in Student Personnel Administration this month.

Whetstone most recently served as the director of basketball operations at SIUE. She was in charge of many facets of the program including managing the budget and finances, overseeing graduate assistants and managers, assisting with video exchange and game day scouting reports and serving as the oversight for assembling the season’s game schedule, including initiating the contracts.

She has also served on the coaching side of college athletics, most recently as the interim head coach at SIUE in the spring of 2021. Prior to her time at SIUE, she was as an assistant coach and director of operations at Rollins College in Winter Park, Florida.

While at Rollins as an assistant coach, Whetstone assisted with planning practices and running drills, collaborated in-game strategies with the head coach, prepared game day scouting reports and assisted in all aspects of recruiting Division II student-athletes.

She served as the women’s club basketball head coach at Texas A&M, where she secured a 21-4 record and won 2 championships in the inaugural season of the program. She has also been an assistant coach at the high school level, an event coordinator and an operations assistant.

Whetstone earned her bachelor’s degree in Business from Rollins College in 2017, before earning her master’s in Sports Management from Texas A&M in 2019.

Their hires are contingent upon formal approval by the Missouri State Board of Governors at its next meeting.