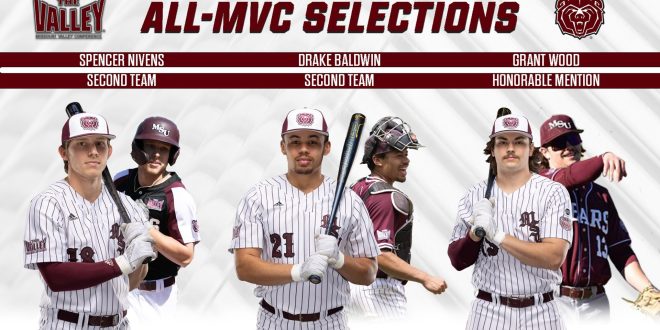 Nivens, a redshirt freshman from Columbia, Mo., leads the Bears in batting average at .367 with eight home runs and 45 RBI. He has led off in 37 of MSU’s 51 games, played all three outfield positions and first base, and ranks in the top five in the MVC in average, on-base percentage (.451), hits (76) and walks (34) while ranking ninth in both RBI and total bases (114). He owns hitting streaks of 12 and 13 games as well as a 30-game on base streak and leads the Bears with 22 multi-hit games and 14 multi-RBI efforts. He also hit leadoff home runs at Samford (April 3) and Bradley (May 19).

An all-defensive selection last year, Wood has started every game of his three-year Missouri State career, spending time at shortstop, third base and second base this season. The fifth-year senior has reached safely in 48 of 51 games with a long streak of 22 and is hitting .290 with five homers and 37 RBI. The Jefferson City, Mo., native has 16 multi-hit and 10 multi-RBI games in 2022 and owns a .413 on-base percentage thanks to ranking in the top eight in The Valley in both walks and hit by pitch.

The Bears are hosting the MVC Tournament this week and play in the opening game today at 1:30 p.m. against Illinois State at Hammons Field.