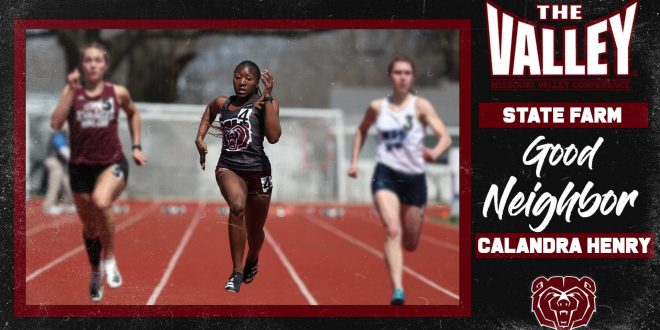 Henry, a junior track and field athlete, earns the distinction as a student-athlete who exemplifies outstanding citizenship. She is one of 10 MVC student-athletes to be recognized this spring.

A successful student-athlete, the Clarksville, Tenn., native has shined for the Bears, racing to six top-three finishes throughout the outdoor season while competing in the 100-meter and 200-meter.

Off the track, Henry is involved in the student-run organization Black Student-Athlete Alliance (BSAA), serving as the Vice President of Service & Giving Unity in Action Sister Circle. She also gives back to the community, helping organizations including Convoy of Hope, Bears Read, Girls on the Run and the Breast Cancer Awareness Walk. Henry also holds a 3.73 GPA in Movement & Exercise Science while earning spots on the MVC Scholar-Athlete team, the MVC Honor Roll and the MSU Athletic Director’s Honor Roll.

Henry is set to compete for the Bears this weekend when MSU travels to Des Moines, Iowa, for the MVC Outdoor Championships on May 13-15.