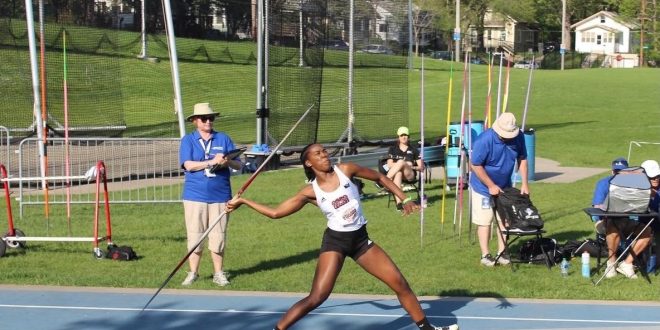 Etienne, Rose Lead Bears on Day One of Track and Field Championships

DES MOINES, Iowa – Starting the day with a one-two punch, Rochelle Etienne and Jaide Rose earned spots on the podium on the first day of the Missouri Valley Conference Outdoor Track and Field Championships, here Friday.

Competing in the javelin throw, Etienne earned a gold medal in the event, smashing her lifetime best by nearly five meters while throwing to a mark of 46.69m. Rose followed up Etienne’s performance, finishing in second place in the competitive conference field. Her silver medal throw of 45.50 meters was lifetime best, as well, improving on her former record of 44.49 meters. Cheyenne White also threw a season-best against her MVC opponents (42.09m), finishing in fifth for the Bears.

“We couldn’t have really asked for a better start to this meet,” said Fife. “Twenty-two points in the javelin with huge performances from Rochelle, Jaide and Cheyenne were just what we needed to get things started. They were great today!”

Day one of the championships also featured several qualifying races. In the 200-meter dash, Calandra Henry earned a spot in Sunday’s finals after finishing second in her heat and tying for the fifth-fastest qualifying time (24.47). Tamia Rayford also competed in the event, racing a time of 26.82 seconds.

In the 1,500-meter run, Sierra Williams and Edna Dar qualified for the event finals, as well. The pair both finished third in their respective heats, earning automatic spots in Sunday’s race. Williams qualified with the third-fastest overall time of 4:34.00, while Dar raced a 4:35.39, good for eighth overall. Ashley Rolewicz also competed in the 1,500-meter for the Bears, finishing 12th out of the 30-person field (4:40.57).

Shelby Palmer wrapped up day one for the Bears, competing in the 10,000-meter run for the first time this season. Her time of 36:46.03 earned her a fourth-place finish in the event, narrowly missing the podium. The mark was a lifetime best for Palmer, beating her former time of 38:29.99 recorded at the championships last season.

“The exclamation point on the night was not only Shelby’s gutsy performance in the 10,000-meter but the way our team rallied and cheered her on all the way through,” continued Fife. “There’s so much momentum heading into tomorrow and we’re excited to see everyone feed off of today’s energy and keep things going.”

After the first day of competition, MSU is tied for third place with Indiana State in the team standings with 27 points.

The Bears will be back in action when the championships continue Saturday at Drake Stadium. The first event of the second day of action is set to begin at 10 a.m.