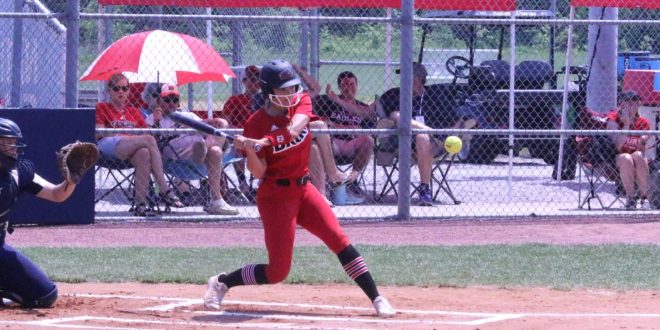 EVANSVILLE, Ind. – Drury’s postseason ride came to an end on Friday as they lost in the winner’s bracket game to Saginaw Valley State 2-0, then were eliminated by Southern Indiana, the top seed in the Midwest Regional, 9-3 in Evansville, Indiana.

The Panthers were playing in the NCAA-II Tournament for the first time in the team’s 15-year history and they ended the season with a program-best 37 wins, going 37-17.

Drury was forced into a Friday evening after falling 2-0 to Saginaw Valley State (36-18) in Game 3 of the tournament.

Panthers starter Kristina Bettis (24-5) took a no-hitter into the sixth, but the Cardinals took advantage of a walk, sacrifice bunt, a wild pitch, and a Drury error in the third inning to get on the board. In the sixth, Saginaw Valley State got their first hit with lead-off single from Sarah Gersch, who promptly stole second, then came home on a single by Julia Salisbury. The earned run in the sixth against Bettis was the first one she had allowed in six games and 48.2 innings.

Cardinals starter Julia Mundy (12-5) kept the Panthers off of the scoreboard as she fired a one-hit shutout surrendering only one walk while striking out seven. Bettis went seven innings and allowed two hits, two runs and one earned run with two walks and five strikeouts.

Facing elimination Friday evening, Drury jumped out to a 2-0 lead in the top of the first inning against Southern Indiana, getting RBI singles from Gracie Thomas and Sydney Sneed.

The Screaming Eagles (45-11), not only the top seed in the regional but also the 10th ranked team in NCAA-II found their offense earlier in the day as they posted 16 hits in a 10-1 win over Lindenwood that kept their season alive. USI kept that momentum going at the plate in their second game as they responded to Drury’s two runs with four in the bottom of the first. Southern Indiana banged out five hits in the opening frame and four were doubles.

Drury looked to chip away in the fifth as Camryn BeDell led off the inning with a single and scored on a sacrifice fly by Rylee Kolb. The Eagles bounced back again with a pair of runs in the bottom half of the fifth and they added a home run in the sixth from Allie Goodin, her third of the afternoon as she cleared the fence twice in the Lindenwood game.

Abby Tiemann went 2 for 3 at the plate with a run scored in the game for Drury. Seven different players registered hits for the Panthers.

Southern Indiana will play Saginaw Valley State on Saturday but must defeat the Cardinals twice to advance to the Midwest Regional Championship Series.