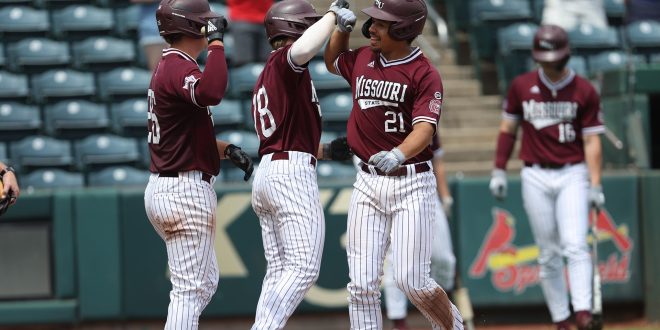 SPRINGFIELD – Missouri State scored eight runs in the third inning and five in the eighth Friday on the way to a 15-5 series-opening victory against visiting Illinois State at Hammons Field.

Drake Baldwin notched his second career two-homer game and drove in four runs, Mason Hull went 4-for-5 with two doubles and three runs, Grant Wood drove in three and Spencer Nivens went 3-for-5 to extend his hitting streak to 10 games.

The first four Bears (23-23, 6-10 Missouri Valley Conference) reached in the third, with Mason Greer driving in the game’s first run with a single and Baldwin making it 4-0 with a three-run homer. Missouri State tacked on four more runs, with Wood driving in one with a bases-loaded hit by pitch and scoring on a wild pitch on either side of a Nivens two-run single.

ISU (18-26, 5-11) scored four unearned runs in the seventh and a single tally in the eighth for its offense.

Dakota Kotowski led off the seventh inning with his 20th homer of the season and 40th in his career, becoming the ninth player in school history to reach each of those milestones. Hull doubled and scored on a Cam Cratic sac fly later in the seventh to make it 10-4.

Then in the eighth, the Bears scored the run-rule victory with a five-spot, their 19th inning of at least five runs this season. After Baldwin’s second home run of the game and 12th of the year, the Bears loaded the bases and scored when Duff was hit by a pitch and Hayden Moore walked before a two-run single by Wood ended it.

The victory was also the 1,332nd of head coach Keith Guttin’s career, moving him into a tie for 16th on the all-time wins list.

Game two of the series is set for 11 a.m. Saturday.