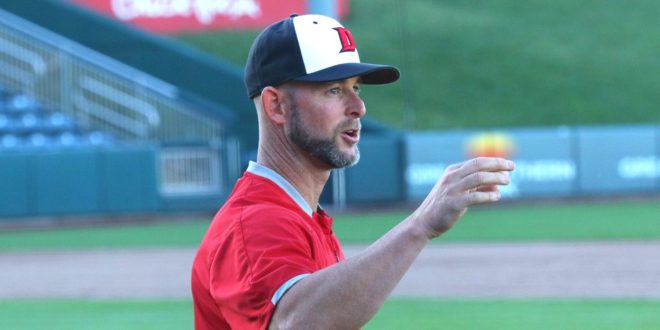 SPRINGFIELD, Mo.— Drury head coach Scott Nasby was named the Great Lakes Valley Conference Coach of the Year and four Panthers were named to the All-GLVC team in a vote of league coaches last week.

After missing the GLVC Tournament last year, Nasby led Drury to the Green Division championship, a 36-14 record and a 21-7 mark in the league. The team led the conference with a .350 batting average as a team and ranked among the nation’s leaders in runs scored with 468.

The award marks the first time a Drury baseball coach has ever won the league’s Coach of the Year honor. Nasby is in his 10th season as head coach and enters the GLVC Tournament with a 293-204-1 record.

Aaron Mann was named Second Team All-GLVC. The junior from Little Rock, Ark. is hitting .406 with eight home runs, and 54 runs batted in. Mann is tied for second in the league in doubles with 19; he is fourth in hits with 73, and eighth in RBIs. The award is Mann’s third All-GLVC selection in his three complete seasons at Drury.

DJ McNew was named to Second Team All-GLVC after hitting .331 with six home runs and 53 RBIs. McNew had 19 multi-hit games and is tied for second in the league in triples with five. The senior from Mountain Grove, Missouri, is tied for the team lead in multi-RBI games with 14.

Stephen Randazzo also was named to the all-conference second team. The senior from Chesterfield, Missouri has a .333 average with 10 homers and 45 RBIs. Randazzo has 19 doubles and is tied for second in the GLVC with that total. His slugging percentage of .673 leads the Panthers and he has had 13 multi-RBI games.

Brant Schaffitzel landed the second All-GLVC award of his career. The fifth-year senior from Springfield leads Drury in hitting with a .434 average. He has homered once, driven in 31, and owns a .551 on-base percentage. Schaffitzel has put down a team-best 12 sacrifice hits, and has a .646 slugging percentage.

Drury opens the GLVC Tournament on Thursday against Indianapolis. The first pitch is scheduled for 7:30 pm in St. Charles, Missouri.