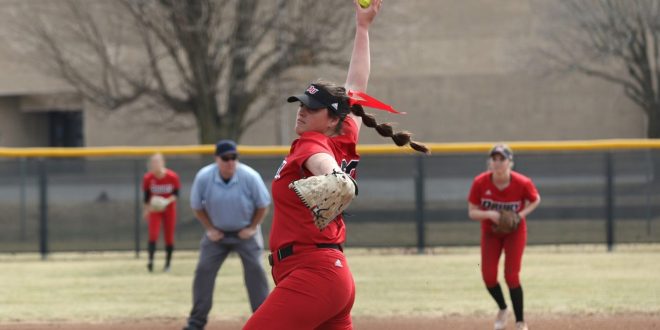 SPRINGFIELD, Mo.— Drury pitcher Kristina Bettis was named the Midwest Region Pitcher of the Year by the D2CCA in a vote of sports information directors. The junior from Swansea, Illinois was also named a First Team All-Midwest Region selection by the D2CCA and the National Fastpitch Coaches Association.

Bettis is the first player in program history to be named the region’s Pitcher of the Year. She is 23-4 with a 1.16 earned run average and has set program records in wins and strikeouts with 256 in 193.2 innings. In the Great Lakes Valley Conference Tournament last week, she went 1-1 but posted an ERA of 0.00 and struck out 22 batters with one walk allowed in 14.2 innings.

Bettis also set a Drury single-game record with 16 strikeouts on April 2 at Missouri-St. Louis and she fired Drury’s first no-hitter in 12 years on March 14 at Rockhurst.

Last week, she was named the GLVC Pitcher of the Year and was a First Team All-GLVC selection.

The Panthers are 36-15 and have advanced to the NCAA-II Tournament for the first time in program history. Drury plays Lindenwood on Thursday at noon in the opening round of the Midwest Regional in Evansville, Indiana.