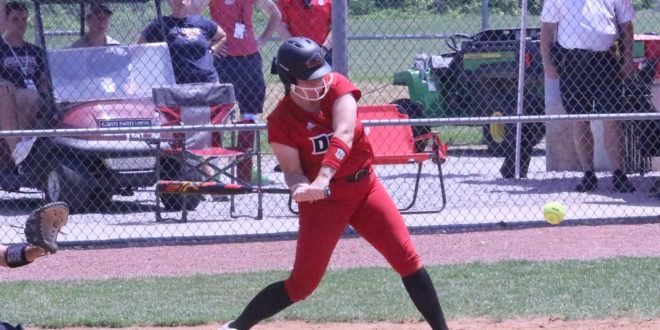 EVANSVILLE, Ind. – Drury’s first-ever game in the NCAA-II Tournament was such an epic it could have counted twice. Behind Kristina Bettis’ 14 shutout innings and Gena Kulberg’s sacrifice fly in the top of the 14th, the Panthers outlasted Lindenwood 1-0 in 14 innings in the opening round of the Midwest Regional Tournament in Evansville, Indiana on Thursday.

For the second-straight game, Bettis (24-4) threw a no-hitter through seven innings but, at that point, the game was only at its midway point. The junior from Swansea, Illinois, who earlier this week was named the Midwest Regional Pitcher of the Year, surrendered just two hits and no walks while striking out 10.

Lindenwood hurler Amanda Weyh, herself named a First Team All-Midwest Region performer this week, matched Drury firing scoreless inning after scoreless inning. The Panthers put up 10 hits through 12 innings against Weyh, but she kept Drury off of the scoreboard, allowing only one walk while recording eight strikeouts.

The Panthers managed to push home the winning run in the top of the 14th against reliever Brianna Macias (2-1). Abby Tiemann led off the 14th with a single and Camryn BeDell pushed her to second with a sacrifice bunt. Kailyne Luna then hit a ground ball that caught Tiemann in a run-down between second and third, but an error put Tiemann at third base with one out. Kulberg then belted a pitch deep to left that easily scored Tiemann for the game’s only run.

Bettis closed out the contest retiring Lindenwood in order in the bottom of the 14th. She retired the last 15 batters she faced from the 10th through the 14th inning.

“It’s tough to play two games to get one ‘W’ but that’s the way today was and that’s what happens when you have two great pitchers going head-to-head,” said Drury head coach Jerry Breaux. “I know our team and I knew they wouldn’t quit. They found a way to get a win and Kristina Bettis was even better than she was last week pitching, essentially, two games and shut them down.”

Drury also also played error-free for the 14 innings and got out of jams in the eighth and ninth when the Lions had the winning run in scoring position with one out.

“We were good defensively today, and the left side of our defense played lights-out,” added Breaux.

The 37th win this season for the Panthers sets a program record in victories. Drury reached 36 wins in 2012 and in 2019.

The Panthers will play the winner of top-seeded Southern Indiana and number eight seed Saginaw Valley St. on Friday at 2:30 pm in Evansville.