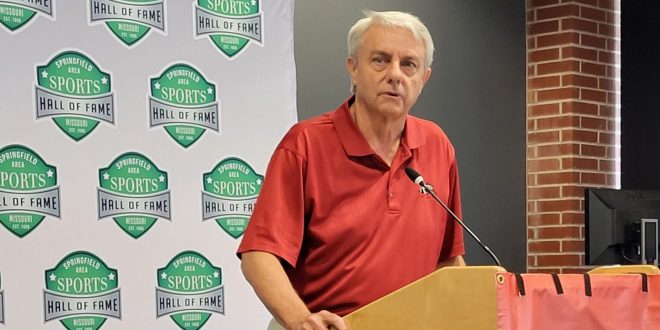 SPRINGFIELD, Mo.— Drury’s former Assistant Athletics Director and Sports Information Director, Dan Cashel, will be inducted into the Springfield Area Sports Hall of Fame in its next induction class scheduled for Oct. 4, 2022. Cashel was selected as a Hall of Fame inductee in 2021, but his induction was delayed due to the coronavirus pandemic. He was announced as part of the 2022 Hall of Fame class at a news conference on Tuesday.

The Springfield Area Sports Hall of Fame Induction Banquet is scheduled for Oct. 4 at the Oasis Convention Center. Tickets are $50, and reservations can be made by email at masterfuleventsmo@gmail.com.

Cashel served the university in a variety of roles, but his longest and most visible stint was as the Sports Information Director and Assistant Director of Athletics, a post he held from 1977 to 2005. He retired in the summer of 2020 as Drury’s Director of Campus Recreation & Student-Athlete Enhancement.

Cashel joined Drury in the summer of 1974 and worked for two years in the Admissions Office. He shifted to the Athletics Department as the Sports Information Director for the 1977-78 season, a year that saw the Drury men’s basketball program rise to become the nation’s number one ranked team in the NAIA and, one year later, won the national championship.

He took on additional responsibilities as Assistant Athletics Director during the 1980’s and was the head coach of the Drury men’s tennis team from 1979-1985, guiding the program to a 102-68 record. The Panthers were the District 16 runner-up in each of his seven seasons, and he coached five All-District performers.

While serving as SID, Cashel assisted Drury’s move to the NCAA in 1991-92 and took on the duties of Compliance Coordinator. On more than one occasion, Cashel filled in as an interim Director of Athletics, guiding the department during times of transition. In 2010, he shifted to a role combining work in the Student Affairs office along with Athletics on various projects. He oversaw the daily operation of the Barber Fitness Center, served as coordinator for the Drury Athletics Hall of Fame, as well as Drury’s All-Sports Awards held near the end of each academic year. He continued to play a vital role with Drury’s basketball teams as he managed the official scorer’s table for games at the O’Reilly Family Event Center. Cashel was also the tournament coordinator for the men’s and women’s tennis NCAA-II Sub-Regional each time the Panthers hosted the event, the most recent being in 2018.

While he served Drury in a variety of roles, it was his tenure as Sports Information Director that will leave a lasting legacy. His work earned more than 20 national awards from the College Sports Information Directors of America for various athletics publications, and his basketball yearbooks/media guides were voted the best in the nation numerous times in the NAIA. He worked with local, regional, and national media outlets promoting Drury Athletics through the launch of the Lady Panthers basketball program in 2000-01, in addition to the department’s growth that featured six sports when he started in 1977-78 to its current total of 28 today.