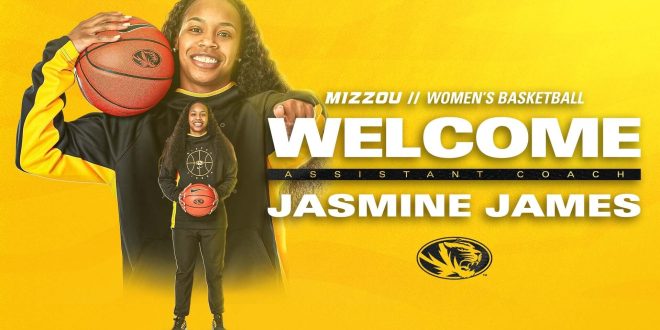 James, who joins Mizzou after spending two seasons at Tennessee Tech, has experience coaching at the high school and collegiate level and was a standout player in the Southeastern Conference who went on to be a 2013 WNBA Draft pick and had a four-year professional career.

“We are thrilled to bring someone with Jasmine’s playing and coaching resume into our basketball family,” Pingeton said. “She was a high-level player in the Southeastern Conference at Georgia and has been a head coach at the high-school level along with her time at Tennessee Tech who plays in an extremely competitive league. I am looking forward to seeing her impact our current and future Tigers on and off the court.”

“Coach Pingeton and her staff have created and nurtured a first-class women’s basketball program that represents everything that I relish within an organization,” James said. “The student-athletes and coaches are held to a high standard on and off the court and depicts all the good you want to see in collegiate women’s sports. I am beyond elated to be able to be a part of the Mizzou women’s basketball family and add to that continued growth!”

James’ Golden Eagles played for the Ohio Valley Conference Tournament Championship in 2022 along with advancing to the second round of the Women’s NIT.

Prior to Tennessee Tech, she spent the 2019-20 season as the director of basketball operations at SIUE.

Before her year at SIUE, James was the head coach at Bartlett (Tennessee) High School, her prep alma mater. She led the program to its most wins in the previous five seasons as well as a runner-up finish in the District 15-AA tournament. Her coaching career got started as an assistant at Bartlett and on the summer circuit with the Arkansas Banshees organization.

A third-round draft pick to the Seattle Storm in 2013, James later played for the Phoenix Mercury. She went on to a four-year professional career, playing overseas in Brazil, Luxembourg, Germany and Israel.

As a collegiate player, James was a freshman All-American during the 2009-10 season at Georgia. She went on to earn second team All-SEC honors during the 2012-13 season. Along the way, she was a consistent Academic All-SEC performer.

Following her playing career, James spent time coaching with the Arkansas Banshees’ organization on the summer circuit served as an assistant coach at Bartlett High School for one season. In 2018-19, she was promoted to head coach at her alma mater and proceeded to lead the program to its most wins in the previous five seasons as well as a runner-up finish in the District 15-AA tournament.

James earned a bachelor’s degree from Georgia in 2013, majoring in recreation management and leisure studies.