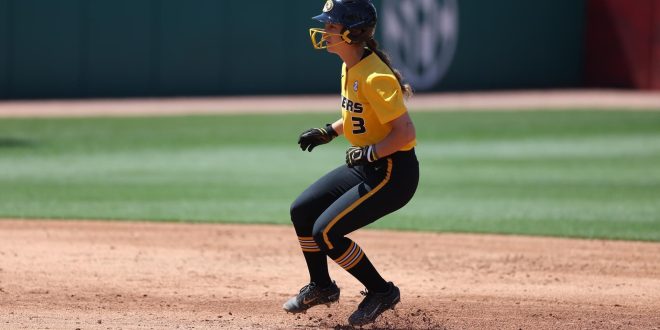 The Tigers could not get the bats going early, going down in order in each of the first three innings. Jordan Weber kept the game scoreless, stranding five runners on base through three innings.

Mizzou got on the board in the top of the fourth. Jenna Laird led off the inning with an infield single before she was bunted over to second. Kendyll Bailey’s check-swing grounder back to the pitcher was thrown away, allowing Laird to score. Wert was intentionally walked to put runners on first and second, but the Tigers could not bring them in.

With Mizzou leading 1-0, Alabama answered in the home half. With one out, Heivilin reached on an error to start the rally. After a fielder’s choice, Haney was walked to put two runners on with two down. Prange then hit a deep fly ball to left that appeared to hit off Chaumont’s glove and stay in the field of play, but it was ruled a home run on the field, which is not reviewable.

Trailing 3-1, the Tigers looked to get back on the board in the fifth inning. Emma Raabe and Jenna Laird singled to put two runners on, but Mizzou was unable to cut into the deficit, ultimately falling 3-1.

Jenna Laird extended her hitting streak to nine games with a 2-for-3 day. She scored Mizzou’s lone run of the afternoon.

Megan Schumacher allowed only one hit over 2.1 innings of work with two strikeouts.

Mizzou led in all three games of the series.

The Tigers fall to 9-17 all-time against Alabama.

The Tigers will face off with Auburn on Wednesday, May 11 at 2:30 p.m. in Gainesville, Fla. to open SEC Tournament play. Wednesday’s contest will air on SEC Network with Amanda Scarborough and Kevin Brown on the call. The winner of Wednesday’s game will face second-seeded Alabama on Thursday.