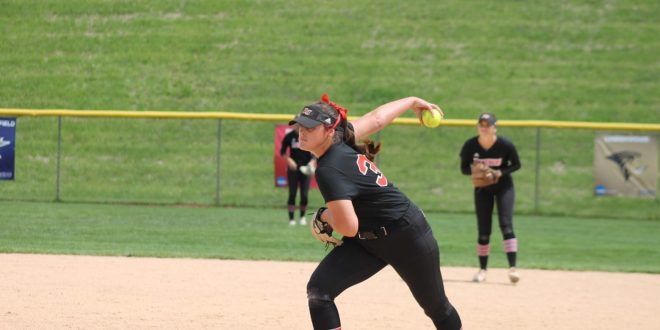 EAST PEORIA, Ill. – Indianapolis never hit a ball out of the infield against Drury starting pitcher Kristina Bettis, but the third-ranked Greyhounds manufactured a run in the bottom of the eighth for a 1-0 win over the Panthers in the Great Lakes Valley Conference semifinals at the EastSide Centre in East Peoria, Illinois on Sunday.

Drury, the number three seed in the tournament, fell to 36-15, while Indianapolis, ranked third nationally and seeded second in the GLVC, advanced to the finals with a 47-7 record.

Bettis had a no-hitter going through seven-innings and, for the second-straight tournament game, threw a one-hitter without allowing an earned run. The junior from Swansea, Illinois, who was named the GLVC Pitcher of the Year last week, struck out 11 batters and allowed only one walk in the loss and dropped to 23-4.

Greyhounds right-fielder Hanna Burris started the bottom of the eighth with an infield single, and a sacrifice bunt moved her second. A passed ball then put Burris at third with one out. Pinch-hitter Jocelyn Calvin hit a grounder to first, but the throw home was too late, giving Indianapolis the winning run.

Drury had an opportunity to get on the board in the first inning. The Panthers got back-to-back singles to start the game and loaded the bases with one out after a walk. UIndy changed pitchers, though, and inserted Kenzee Smith, who got a strikeout and ground ball to get out of the early jam.

Smith then shut down Drury the rest of the way. She retired 23 of the 24 batters she faced, surrendering only a one-out walk in the fifth. Smith (25-5) went 7.2 innings allowing no hits, no runs, one walk and she also fanned 11.

Indianapolis advanced to the GLVC Championship game and will play top-seeded Southern Indiana on Sunday afternoon.

The GLVC Tournament changed to a single-elimination format after the first two days of the tournament were rained out. The Panthers got through the quarterfinals with a 7-0 win over Illinois Springfield.

Drury will find out if their season will continue on Monday at 9 am when the NCAA announces the national tournament field for Division II. Last week, the Panthers were ranked fifth in the Midwest Region. Eight teams from the region will advance to a pair of four-team sub-regional brackets. Should Drury be selected, it would be the first time in program history they will advance to the NCAA-II Tournament.