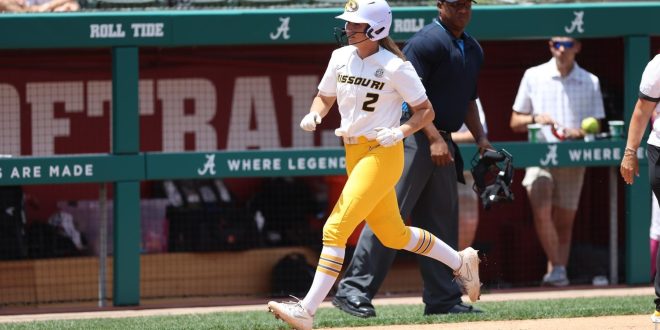 Mizzou jumped out in front for the second game in a row. With two outs, Kendyll Bailey drove a 2-2 pitch over the center field wall for a solo homer, giving the Tigers an early 1-0 lead.

Alabama rallied to put one on the board in the second with two outs. After Shipman singled to center, Dowling doubled to right center to bring her in, tying the game at one.

The Tigers looked to get on the board in the third inning after Jenna Laird singled and Brooke Wilmes doubled to put two runners in scoring position. Wert was intentionally walked to load the bases with one out, but Mizzou could not take the lead.

Mizzou put a runner in scoring position again in the fourth with one out after a Kara Daly single and a sacrifice bunt, but the Tigers could not bring a run around to score.

Kimberly Wert doubled down the left field line with one out in the fifth inning before she was replaced by Kendal Cook. Alex Honnold reached on a fielder’s choice to shortstop and Cook reached third on an interference call. Chaumont grounded a ball to third and the throw home was in time to get Cook at the plate. Honnold and Chaumont moved over to second and third on a wild pitch before Kara Daly was hit by a pitch to load the bases. The bases were left loaded, and the game remained tied.

Alabama threatened in the bottom of the fifth after a leadoff bunt single. With runners on the corners, Laurin Krings picked up a strikeout and Kendyll Bailey threw out a runner at the plate to end the inning.

Hatti Moore doubled on the first pitch of the sixth inning, but the Tigers could not bring her around to score.

A one-out double by Shipman sparked an Alabama rally. Dowling walked before a groundout moved the runners to second and third with two down. Doerr lined a 1-0 pitch just over Laird’s glove at short to put the Crimson Tide up 3-1.

Wert walked to lead off the seventh, but the next three batters went down on strikes to end it.

Brooke Wilmes extended her hitting streak to 12 games with a double in the third inning. The double was the 57th of her career, giving her the Mizzou all-time record.

Jenna Laird extended her hitting streak to eight games with a single in the third.

Kendyll Bailey added to her career best home run total with her 11th of the season.

Kara Daly went 2-for-3 at the plate with a pair of singles for her eighth multi-hit game of the season.

Kimberly Wert went 1-for-2 with a double and a pair of walks, one of which was intentional. She has been walked intentionally three times through two games.

Mizzou will conclude the regular season on Sunday at 1 p.m. in the series finale against Alabama. The game will stream live on ESPNU with Madison Shipman and Eric Frede on the call.