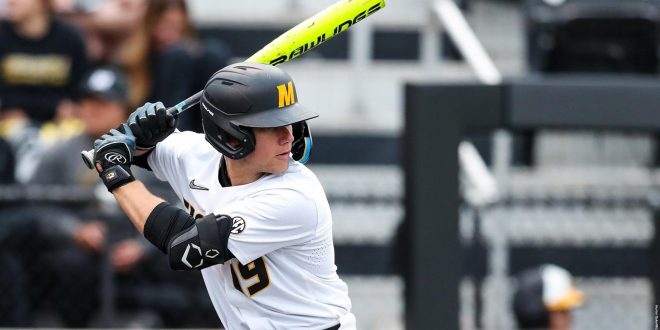 OXFORD, Miss. – For the second straight night, University of Missouri baseball jumped to a first-inning lead but could not hold it as Ole Miss rolled to an 8-1, series-clinching victory on Saturday at Swayze Field.

After scoring a run on a pair of hits in the first inning, Mizzou (25-19, 7-16 SEC) mustered just three hits over the next eight innings. Meanwhile, Ole Miss (26-19, 9-14 SEC) capitalized on every scoring opportunity to run away in Saturday evening’s contest.

Torin Montgomery produced Mizzou’s lone RBI with a single in the first. Trevor Austin scored the run, part of a 2-for-4 day for the Tiger left fielder. On the mound, Spencer Miles (3-5) took the loss while allowing five runs in six innings. The right-hander struck out eight without issuing a walk but surrendered 10 hits.

Four players recorded multi-hit nights for Ole Miss, led by Kemp Alderman who finished 2-for-3 with two RBI and a run scored. Hunter Elliott (2-3) worked seven strong innings for the Rebels, scattering four hits while fanning a season-high nine to earn the win.

Ole Miss broke a 1-1 deadlock in the fourth inning with a pair of runs on three hits. Kevin Graham sparked the inning with a high chopper which took a bounce in the home plate circle and next landed in right field for a single.  Alderman followed with a single to left, just evading the diving glove of Austin. A sac bunt put the two Rebels in scoring position for Hayden Leatherwood who laced a 1-2 pitch into left center for a two-run double.

The Rebels never surrendered the lead, adding two in the fifth and three in the seventh to roll to the 8-1 win.

“I haven’t seen us play this way – whether we’re pressing and trying to do too much. We were really poor in the batter’s box tonight facing a guy that was able to nibble around and get us in a hole. We’re swinging at balls and taking strikes and just a very poor effort I think in the batter’s box tonight that kind of set the tone. We come out in the first inning and scratch one across and things were looking good and then it kind of went haywire from there offensively.”

Mizzou and Ole Miss wrap up the series with a 1:30 p.m. first pitch on SEC Network + Sunday afternoon.