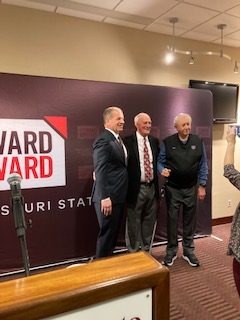 The home to Missouri State Bears and Lady Bears basketball, concerts, graduations and other events will now be known as Great Southern Bank Arena.

The Missouri State Foundation announced the name change in a news conference Thursday morning at the PRIME Overtime Club inside the arena that opened in November, 2008.

The announcement ends a three year process of Missouri State seeking a new partner for naming rights to the arena.

in 2016, three years after Hammons’ death, his company filed for bankruptcy protection in federal court.

MSU announced in 2019 it would re-name the arena after receiving only $24.4 million of the $30 million Hammons had pledged to build the arena.

The university began removing JQH Arena signage in June of 2019, anticipating a name change within the year, but the search for a new partnership was delayed by the COVID-19 pandemic.

Listen to archived audio of the press conference here: