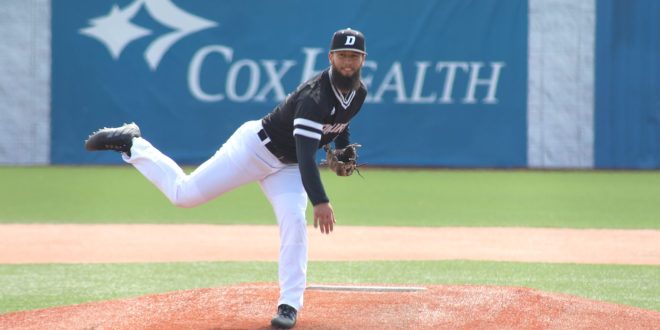 OZARK, Mo. – The Drury Panthers extended their winning streak to six games and completed a four-game sweep on Southwest Baptist on Saturday as they took both games of a doubleheader at US Baseball Park in Ozark. Drury won the first game 9-1, then won game two 14-1.

In game one, Drury scored three runs in the opening frame to seize an early 3-0 lead. Aaron Mann got the Panthers on the board with a sacrifice fly, then Nikko Calabro drove in a pair with a bases-loaded single.

Calabro put Drury in front 5-0 with a two-run home run, his seventh of the year, in the third inning. Stephen Randazzo also homered in the game as he picked up his ninth long-ball of the season with a two-run shot in the fifth.

“You have to give (catcher) Austin Fennewald some credit because Cade’s pitches were moving all over the place today,” said Drury head coach Scott Nasby. “Sometimes, when you are getting more movement on your pitches, it’s harder to catch and harder to locate. It took a little bit of time to figure out how much depth he had on his change-up and how much rise he had on his fastball. But once he got that, we cruised.”

The Panthers opened up an early lead in game two with six runs in the first. DJ McNew was hit by a pitch with the bases loaded, then Calabro drove in two runs with a double. Kaden Helsel produced two runs with a single, and Carson Shaver crossed the plate on an error at third base to put Drury up 6-0.

“(Tyler) was great and really attacked the zone,” said Nasby. “He got some swings and misses from his slider. He also made a real selfless decision to come out after the fifth and give some other guys some reps in a conference game.”

Drury ended the weekend with a three-game lead in the GLVC’s Green Division as their 13-3 record has them in front of second-place teams Maryville and William Jewell, who are 10-6.

The Panthers are on the road next weekend for a four-game series at Lindenwood. Game one is Friday at 6 pm in St. Charles, Missouri.